we’ve always gone to; and we consult the authorities we’ve always consulted. Change in pipe bands is a difficult thing. Progress and innovation are measured in small increments. 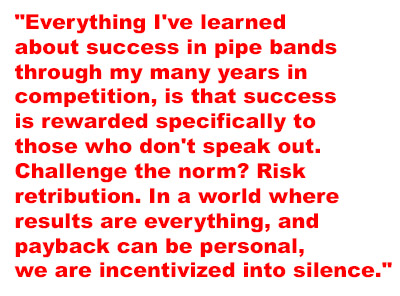 Now, imagine being a woman in pipe bands, challenging the status quo of a dominant male culture, which has historically been discriminatory towards your gender, as well as harsh towards dissenters. It goes against the grain to rock the boat. Indeed, everything I’ve learned about success in pipe bands through my many years in competition, is that success is rewarded specifically to those who don’t speak out. Challenge the norm? Risk retribution. In a world where results are everything, and payback can be personal, we are incentivized into silence.

Third, the pipe band world is one in that the confluence of power, hierarchy, and prestige, creates a potent enabling environment in which we protect those at the top. What do I mean by this? I mean, pipe bands operate in a “celebrity culture,” where social status within the scene is linked to competition success, and branded products, leadership positions, and so on. And we absolutely protect our celebrities. World Champion? Grade 1 bandsman? Gold Medallist? Producer of our favourite piping and drumming product? There’s an element of social protection enjoyed by those at the top of the game. Go to the very top – the famous leaders and medallists who are the stuff of living legend – and in the eyes of the pipe band populace, it’s almost impossible for such people to do wrong. Except of course, that all people are accountable for their actions, and playing an instrument well has nothing to do with being an ethical human being.

When we elevate our top musicians to an elite status that makes them untouchable, we enable their behaviour. And this is exactly what happened in the case of Harvey Weinstein. And Bill Cosby. And Jimmy Saville. And myriad other cases where “celebrity” was the very mechanism through which people were able to sustain abuse. It’s hard enough for someone to come forward regarding any kind of abuse. How much harder is it if that abuser is a pipe band judge? Or a teacher, pipe band leader, or celebrated prize-winner? 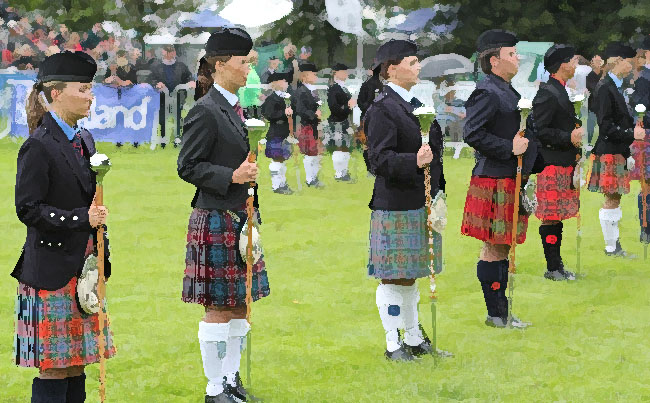 These questions are rhetorical, but they aren’t hypothetical. I know women who have spoken out against such people. I’ve seen first-hand how it is often the victim, not the abuser, who has pulled away from the scene as a result. These things have happened. They’re happening now. We all know the Harvey Weinsteins of our community. We’re all aware of powerful and influential predators in our own scene whose personal track record of serial harassment and assault would rival any of the big scandals to hit the news in recent weeks. We know about those who abuse teaching and mentoring positions in schools and bands to befriend, target, and groom children (boys and girls alike); we know about those with a track record of physical and sexual assault, who are still invited to teach workshops, perform in recitals, and are given elite status in the ranks of top bands. We know who these people are. Yet still, we protect them; we rally around them; we idolize them; we enable them.

Equally, not every abuser is high-profile. UN Women estimates that one-in-three women worldwide have experienced sexual and/or physical violence in their lifetime. This isn’t just a problem of celebrity, it’s an issue of power, and abusers exist in every walk of life. In pipe bands, many exist in the intimate spaces of our . . .