band halls, pipe band committees, and social gatherings. Think for a minute about your own social networks within bands. We all know that guy, whose behaviour towards women makes us uncomfortable, but who we tolerate because he’s a member of our band. We’ve all been privy to “locker room talk” (to quote the current American president), where the sexualized and demeaning ways in which the male collective speaks about women make us cringe, but still we say nothing and shrug it off as banter. We’ve all been present when one of our peers has had too much to drink and becomes sexually aggressive. We’ve all heard stories of the ways in which a woman’s sexual encounter has been detailed and shared in band WhatsApp groups, and subsequent cyber bullying has led women to withdraw from our scene altogether. And we’ve all watched our bandmates rally around their own, conducting “damage control” as they excuse, apologize, and cover up this behaviour.

We might have participated in this; we might have witnessed this; we might have been the target of this. However, we all know about this. Whether or not the scale of abuse experienced by women is a new revelation, the fact that it happens is common knowledge to us all. When we remain silent on these occasions, we normalize this behaviour. It becomes part of the fabric of our scene. Our silence – our complicity – is the mechanism through which the reproduction of these abuses and inequalities is mobilized.

Why do we remain silent? There is a plethora of written material on why women (and men) remain silent in cases of harassment and assault. However, I posit there are also pipe band specific reasons.

The Blogpipe article makes a call-to-action, and argues that associations need to adopt a zero-tolerance policy regarding discrimination and abuse of any kind. I commend these policy recommendations, and I think associations have a much greater role to play in opening important dialogues, and reshaping the current culture around all forms of discrimination. 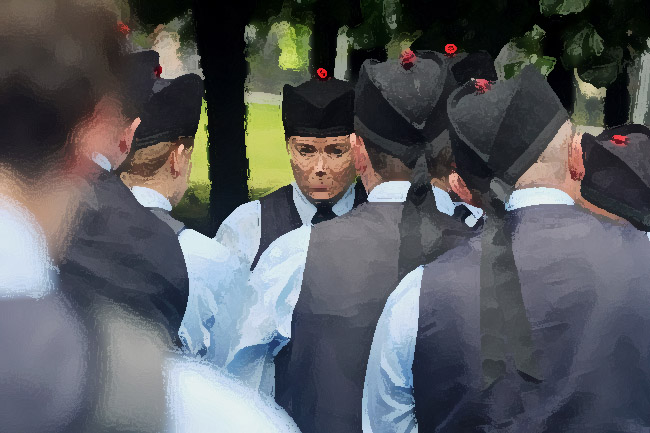 However, I also think we all have a role to play. So much of these exchanges happen in the privacy of our band halls and social circles. How do we respond in these private spaces? Do we challenge behaviour when it happens right in front of us? Do we stand up against harassment, abuse, discrimination, and violence, when we see it? Are we actively reshaping our community in ways which are more inclusive? Or, are we complicit in normalizing and excusing behaviour that is not? Only when we challenge this behaviour can we hope to change it. And this challenge can’t come from women only. Indeed, the power of a male voice calling out the behaviour of his peers, may be paramount to anything we as women could hope to do, even with the help of a trending hashtag. (The fact that it takes so many women’s voices to be heard before we start to believe, is only a further sign of the ways in which women are diminished in our society, in terms of the reliability of their accounts, and ultimately, of their value as people vis-à-vis men).

Yes, by all means, we should be able to tackle this at the level of associations. But we also need to recognize the agency we all have in changing this culture ourselves, when we can rely on the collective action of our peers to help us do it.

Lessons for men: Ultimately, changing the culture of discrimination, harassment, and abuse means changing the ways in which we enable and protect abusers. If you’re a man reading this and you count yourself among the demographic of people who have been truly shocked by just how many women have come forward to write #metoo, I urge you to think really critically about this issue close to home. How might you have been complicit? What kinds of abuse and discrimination have you been witness to, but never stopped? What could you have done differently? To what extent have you heard the accounts of women, but not taken them seriously? On the whole, I’ve met some truly outstanding men in pipe bands, who have been among the most honourable I’ve found anywhere. However, I can still count on one hand the number of times a man has intervened to challenge the behaviour of another man in front of me. As a man, you have considerable power to mediate this behaviour, in ways which women may not. Don’t be the guy who stays silent.

If you’re an event organizer:  If you’re organizing a workshop, recital, or event, think critically about who you invite. I’m not advocating a vigilante witch-hunt based on speculation of abuse. But, in cases where known abuse has been documented, or where students or teachers have complained about the inappropriate behaviour of one of your invitees, don’t invite them back. If you can’t see past this when it’s close to home, think of the celebrity cases, such as the number of event invitations still offered to BBC presenter Jimmy Saville, despite widespread knowledge of his serial abuse of hundreds women and children. By all means, don’t engage in speculation, but do take seriously the accounts of witnesses and victims when they report. Don’t continue to financially and socially reward known abusers. You only continue to prop up their elite status, and contribute to the circle of protection they are able to enjoy, which enables further abuse.

Lastly, a message for women: If you are a woman piper or drummer who is passionate about your hobby and the scene that connects us all, remember just how important a role you play in shaping a future for the other women who will follow you. Only a few decades ago, your very participation would have been radical. Your inclusion today is still profound. We are all pioneers. We are all paving the way for future generations. If you experience behaviour that challenges your participation, please remember who is really at fault. It’s not you. (And if you have not experienced this, be grateful that you are not among the 35 per cent of women worldwide who have. But, by all means, do not allow your story to be used to undermine the accounts of the women who have not been as fortunate. And, as a special message to the women who have experienced the kind of discrimination and abuse outlined above, please remember, #metoo.

Megan Canning is a five-time Grade 1 World Pipe Band Champion, and winner of 23 RSPBA major championships. She is a former piper with Shotts & Dykehead Caledonia, Field Marshal Montgomery, Strathclyde Police, and Prince Charles pipe bands. Canning is a PhD candidate at the University of Edinburgh, and holder of the University’s Chrystal Macmillan scholarship, awarded for research in the areas of feminism and social justice.

What do you think? Please use our comments system below to add your voice to this essential discussion.