both harassment and stalking. And I knew other women who had experienced physical assault by men in pipe bands, in some cases by extremely prominent members of the pipe band community.

In my adult life, my knowledge of such experiences among my peers was broad, but still, when I encountered assault first-hand in spaces far from pipe bands – for example, being grabbed by drunk men while on nights out with my friends – I normalized this behaviour as simply being the preserve of men when alcohol was in the mix. I didn’t even rationalize it as assault until I began interviewing women about their experiences of workplace violence as part of my academic research. Only then, only when I began to analyze it happening to someone else, did I begin to reflect differently on the dozens of experiences I’d had which I’d always interpreted as “normal,” which were actually forms of harassment, abuse and assault. 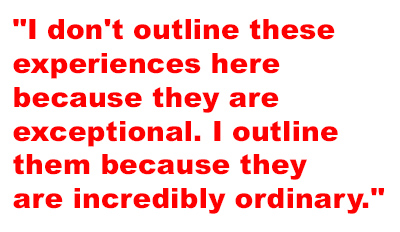 I don’t outline these experiences here because they are exceptional. I outline them because they are incredibly ordinary. And I imagine there is a high likelihood that many women in pipe bands will have their own version of similar events, big and small, that they’ve had to deal with simply on the basis of their existence as women, occupying a male space.

So what does Harvey Weinstein have to do with pipe bands? And what makes the pipe band world a particularly fertile breeding ground for gender-based violence?

First, pipe bands are the historic legacy of a male-dominated pastime. As women, despite our prominence as a collective or our competition success as individuals, we are still the minority in a male space. Women’s ascendance into the ranks of top pipe bands and the platforms of elite solo competition has not been a passive development. These pathways were opened for us by women who had to break down walls, challenge norms, and push boundaries, even to be allowed to participate. And while gender dynamics within pipe bands have no doubt improved greatly since our women pioneers first blazed the trail for us 40 years ago, women in pipe bands today are still subject to a culture of male behaviour that varies in degree from being fun and enjoyable in some contexts, to derogatory and harmful in others. Some spaces within pipe bands might finally be gender-neutral, but others are most certainly not. We’re still working to carve out spaces for ourselves. We’re still working to reshape our community into a place which is fully inclusive. We may have come far, but we are certainly not there yet.

Second, in the piping and drumming community, we operate strongly in a culture shaped by “tradition.” If we want to be successful in pipe bands, we opt-in to a kind of tacit acceptance to continue in the vein of things as they’ve always been done. We play the tunes we’ve always played; we compete in the formats we’ve always competed in; we go to the competitions . . .