The Grade 1 78th Fraser Highlanders celebrated just such legendary commitment when the band honoured piper Bruce MacLean, making him the organization’s first-ever Honourary Lifetime Member, at a special event on August 13, 2018, at the Park Bar in Glasgow. 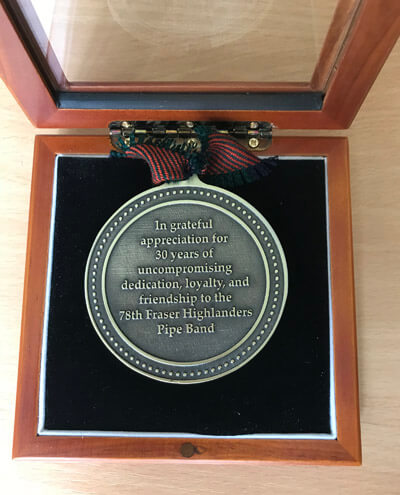 MacLean joined the 78th Frasers in 1988, fresh from serving as pipe-major of the Grade 1 McNish Distillery / St. Thomas Pipe Band of London, Ontario. Since 1988, MacLean has not only diligently attended more practices than most, he has driven to each some three hours each way from his home in Tiverton, Ontario, holding his usual anchor spot in the competition circle.

Friday will mark MacLean’s thirtieth consecutive appearance with the band at the World Pipe Band Championships.

The band presented MacLean with a special medal and a drone plaque from the band, as well as a Meritorious Medal for Service from the 78th Fraser Highlanders Regiment, the organization that originally sponsored the band when it was created in the early 1980s.

“It was my sincere privilege and honour to present Bruce with the recognition of Lifetime Member of the 78th Fraser Highlanders pipe band,” said Pipe-Major Doug MacRae. “Bruce is a bandsman, gentleman and friend of the highest class and this distinction is beyond deserved.” 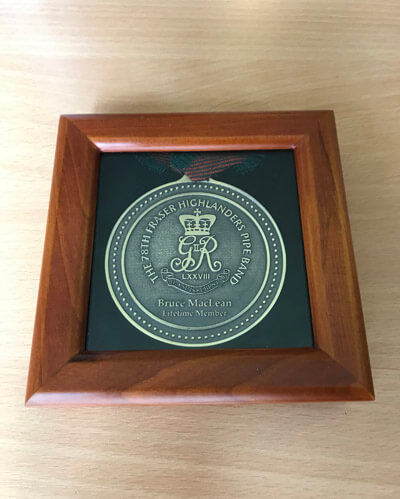 Attended by band members, family and many friends, several tributes to MacLean from absent friends were read, 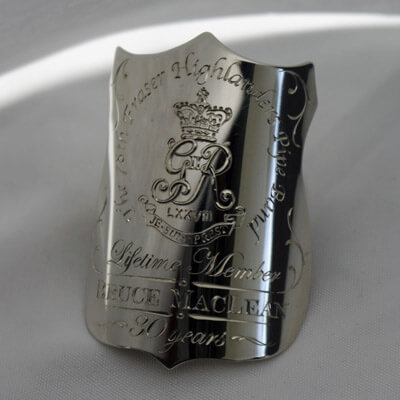 including one from former Pipe-Major Bill Livingstone and another from longtime 78th Frasers piper Tom Bowen.

“What an accomplishment: 30 consecutive appearances in the big circle at the World’s,” Bowen’s tribute read. “What a tremendous thing you have achieved! All the memories; all the wins and just so many great tunes ‎played, many of which you and I got to play together. And all the terrific players you have gone up to the line with over all the years.”

Bruce MacLean –”consistent to form,” remarked MacRae – added a few humble words of thanks before the party ripped into not a few pints.

In addition to his 30 World’s, MacLean has competed several hundred times, played in dozens of performances, and attended thousands of practices during his three-decade tenure.