A piping history first? Bruce Gandy plays (and gets a prize with) his own piobaireachd in competition

It was probably unthinkable only a few decades ago, but Bruce Gandy playing his own piobaireachd in a significant solo competition became what appears to be a first in piping history when he performed “A Lullaby for Colin Alexander” to take third-prize at last week’s online Aboyne Games.

The Dartmouth, Nova Scotia-based Gandy composed the piece only recently, the week after his grandson was born.

Thanks to a relaxing of pedantic traditional strictures and continually playing well-worn tunes and standardized setting over and over again, new piobaireachd compositions and alternate arrangements today are more prevalent and acceptable than perhaps any time in the last 117 years.

While Donald MacLeod, Captain John MacLellan and Archie Kenneth, for example, composed piobaireachds, pipers would have been afraid to submit their excellent pieces in a contest, and the Piobaireachd Society did not prescribe them in set lists until the 2000s.

And while composers like Duncan Johnstone, Donald MacLeod and Peter MacLeod Jr. would submit and perform their own light music pieces, doing the same with ceol mor compositions was apparently unthinkable due to now antiquated piping taboo.

Leading up to Aboyne, Gandy had experienced a hectic week, juggling teaching at the Balmoral School of Piping, creating two other videos and, to top it off, struggling with a finicky instrument, he had to take a break. But submitting “A Lullaby for Colin Alexander” and having it picked by judges Jack Lee, Bill Livingstone, Malcolm McRae and John Wilson (who was a judge in the heat) and going on to take a prize – while make a bit of piping history in the process – melted away the stress.

Compliments of Bruce Gandy, here’s the manuscript of “A Lullaby for Colin Alexander” that he submitted to the judges and for which he gained third-prize at the online 2021 Aboyne Games. Gandy cautions that this is what he performed now, but that the still-fresh composition could change in time – “a gracenote here or there,” he said, “but the melody I believe is set.” Just click on the image to open the full Adobe Acrobat file.

And, now that you have the score, you can follow along with the video of his history-making performance of the tune.

You can also review a slideshow of the scoresheets from the four judges. Just wait to load and then click on the image. You can read their different perspectives on the performance, the composition itself, and the phenomenon of playing a heretofore unknown piece in the competition: 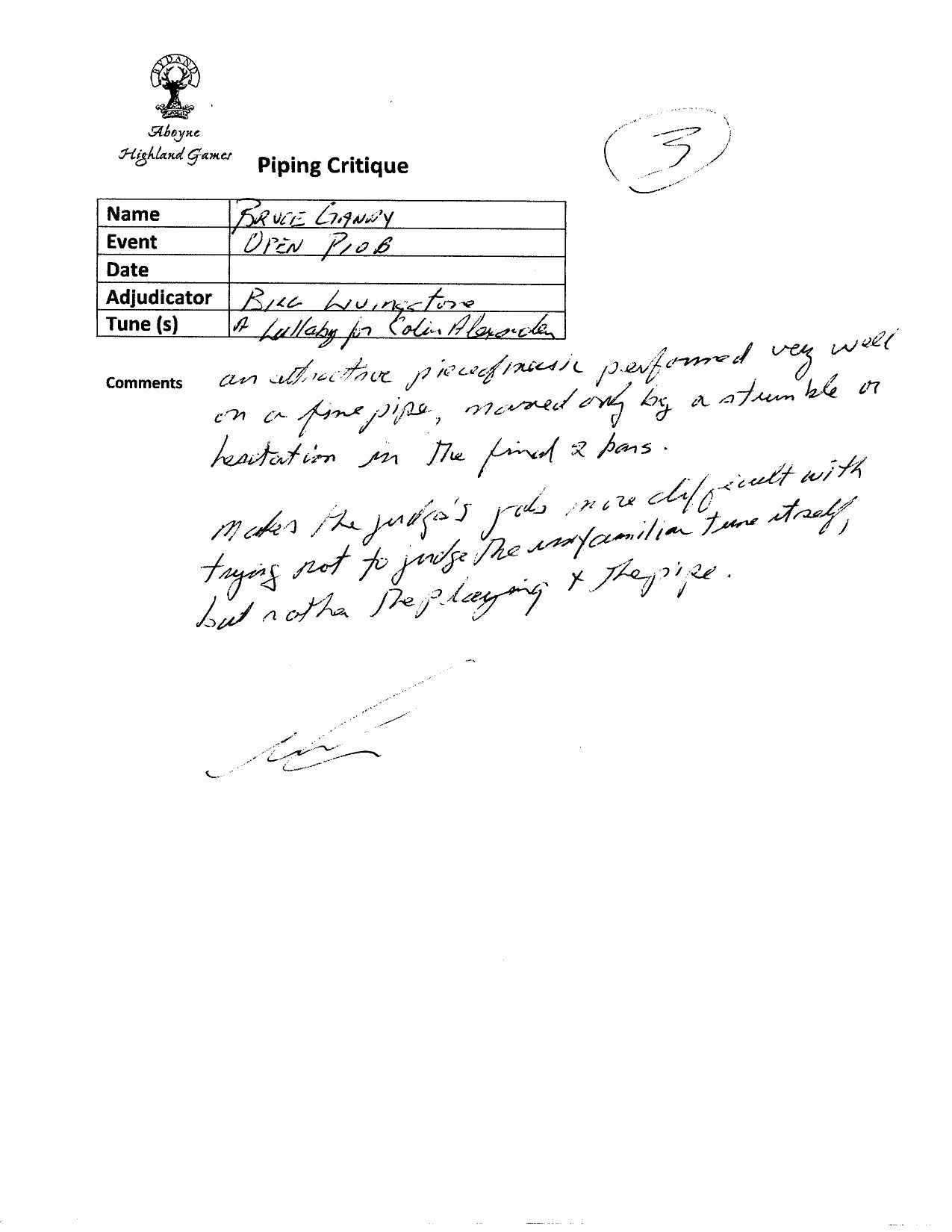 pipes|drums has tried to find silver linings for piping and drumming throughout the pandemic. Because the Aboyne Games were digital, we can share Bruce Gandy’s precedent-setting tune and performance – another step ahead for piobaireachd’s renaissance as a thriving, creative, and more open-minded artform.

See also
Subscribers
The Pipemakers: Robert Reid pipes are rare and prized
News
RSPBA Northern Ireland branch unveils ambitious “Every Beat, Every Note, Every Flourish” tagline
Read all in News
Get the Newsletter!
Sign up to receive our most popular stories in your inbox every month.
Thank you, you have successfully subscribed for our newsletter, please check your email
We use cookies on our website to give you the most relevant experience by remembering your preferences and repeat visits. By clicking “Accept All”, you consent to the use of ALL the cookies. However, you may visit "Cookie Policy" to provide a controlled consent.
Cookie PolicyReject AllAccept All
Manage consent