Adding colour to our past: Ronan Maguire brings old images to life

Even if the piping and drumming world might be experiencing a temporary period of darkness during the coronavirus lockdown, competitions and performances cancelled, and bands having to hold virtual practices by video, Ronan Maguire of Dublin has been at work injecting colour and light into the scene.

A piper with the Grade 1 St. Laurence O’Toole since 1985, who served as pipe-sergeant as Pipe-Major Terry Tully’s right-hand man for 16 years, Maguire is a software quality assurance engineer and runs Maguire Bagpipe Supplies.

Lately, he’s been honing his skills in the improvement and colourization of old black-and-white photographs of pipers and bagpipe makers of the past, illuminating them with a whole different and modern feel. Monotone, dusty images suddenly pop to life, as if the famous people in them are no different than people of today.

“I spent 20-plus years in the software industry and I had done some of it on an ad hoc basis when it was required for job assignments,” Maguire said, “but I never really sat down to do it for my satisfaction until my dad handed me a black and white image of himself when he was 18. So, I decided after I’d cleaned up and de-aged his image that I’d have a proper go at colourizing it. I was pretty happy with how it turned out – and so was he.”

Maguire has a keen appreciation for piping and drumming history, beginning when he got his first instruction at age nine from his father, Joe Maguire, with his local band, St. Kevin’s of Bray, Ireland. He went on to be a pupil of 1st Battalion Scots Guards piper Stephen Power, Ronald Morrison and the great Pipe-Major Angus MacDonald, also of the Scots Guards. Each teacher kept piping history close to the heart and imparted that indebtedness on Maguire.

“Seeing as I have plenty of time on my hands at the moment due to being in lockdown for the COVID-19 outbreak, I was flicking through some of the old historic images and thought they’d be good candidates for the colouring process,” he said. “Most of these images are from the late-19th and early-20th centuries and I can’t recall ever seeing any of them cleaned up before, so I thought to myself, why not give it a go.”

Open the slideshow below to view 34 images. 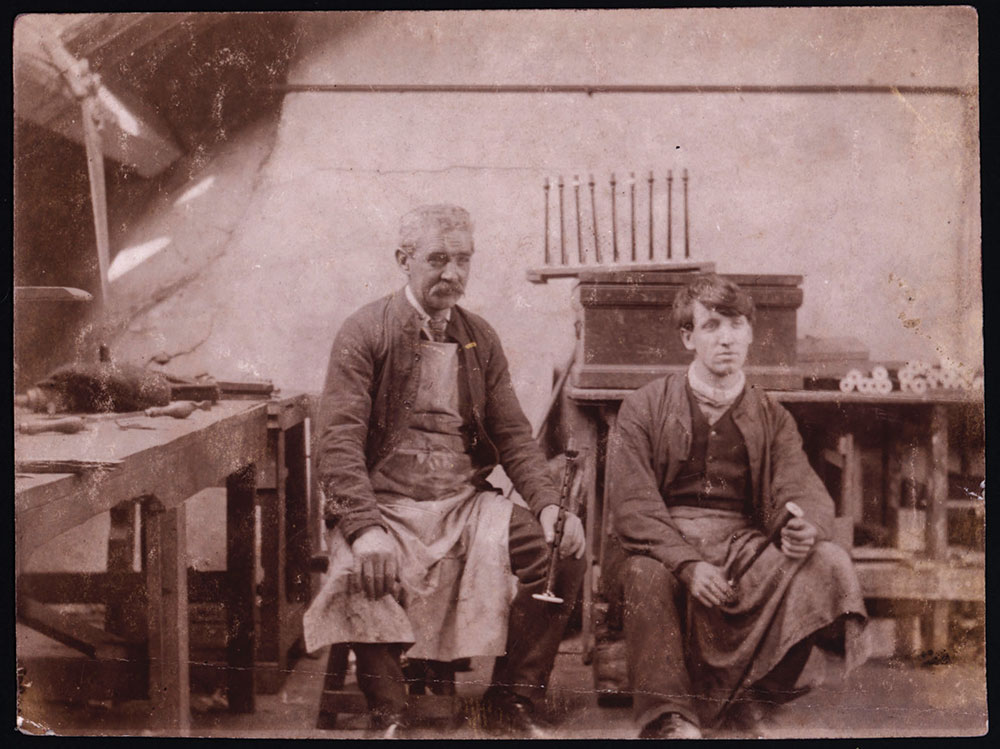 Detailing and colouring each image essentially can take as long as Maguire wants. “It depends really on the speed of your machine, but the initial processing is completed pretty quickly. I could spend hours tweaking bits and still never be satisfied. When you start to go goggle-eyed looking at the same image, then it’s time to stop.”

The colours themselves are something of an inexact science, but can they be considered accurate?

“Without going into too much detail, the answer to that would be yes . . . mostly,” he said. “Back in the mists of time, colourizing started whereby each image had to be hand-coloured. This was mostly a best guess of what the colours were and an extremely tedious process, as you can imagine. Technology is now at the point where a lot can be automated, but not all, as it’s not always successful due to light and shadow and any other damage to the image. The software crunches the numbers in the background and works out the different shades of grey and from this extrapolates what the original colour should have looked like.”

Just as the merits of colourizing classic black and white movies like “Citizen Cane” or “Casablanca” have been debated since the technology process began to be used in the mid-1980s, some piping and drumming purist might prefer to let the past alone. They might prefer that the images of history that they hold in their head remain monotone.

More than likely they would also want to preserve original settings of tunes and scores, as the composer intended them, while others might welcome new interpretations of classic light music and even piobaireachd.

Maguire’s background as both a solo piper and bandsman has no doubt added to his respect for the past but also an openness to try new things. He competed as a soloist, winning major competitions in Ireland, including the Senior All-Ireland, Ulster and Leinster Championships, Piper of the Year, the Macallan Trophy in Lorient and prizes at the Northern Meeting in the Silver Medal and Strathspey & Reel in 1998. Playing in three sold-out Pre-World’s Concerts with the musically creative – but always respectful – St. Laurence O’Toole can’t hurt, either.

“I think it gives new life to the images – removing the noise alone transforms them, but each to their own,” Maguire said. “Some may like it, some may not. They can decide for themselves. I’ve had lots of good reports and people have contacted me to see if I would restore and colourize some of their family images, and I’m happy to be asked to do this.”

And, in this temporary time of uncertainty, keeping an open mind and a willingness to confront, accept and even leverage change is perhaps a very good idea.

“It just might turn into a new line of work. You never know.”