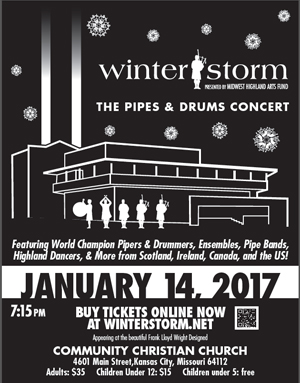 The 2017 edition of the annual competitions, workshops and recitals that make up Winter Storm in Kansas City, January 13-15, will once again see expansion with new contests, sponsors and entries.

The registered nonprofit Midwest Highland Arts Fund, which puts on Winter Storm, is adding new piobaireachd contests for amateur pipers in Grade 1, Grade 2 and Grade 3, or their association’s equivalent levels.

The Midwest Pipe Band Association has agreed to make Winter Storm a qualifying event for its regional amateur competitions, with the top three finishers in each of the three North American Amateur Ceol Beag grades receiving an invitation to compete in the MWPBA Solo Piping Contest Finals on April 1, 2017, in Palatine, Illinois.

Organizers report that the record of 200 entries to the 2016 Winter Storm has been shattered, with a total of 271 solo entries received for the 2017 events due, they say, to the addition of the piobaireachd contests and “organic growth” in almost every other event category.

New sponsors have also come on board, including a beer company underwriting increased prize money for the “Winter Steam” anything-goes creative competition that follows the Saturday night concert.

Winter Storm was started in 2001 and has steadily grown annually. The event has been the model for others around the world.