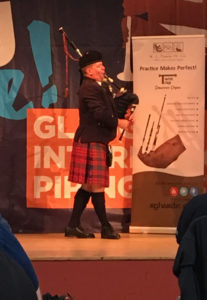 Toronto’s Ian K. MacDonald is one of 12 people to have won both Gold Medals in the same year, and he doubled up on the piobaireachds during his recital at the National Piping Centre, playing two complete tunes. The third recitalist in the series sponsored by R.G. Hardie, MacDonald was in great form throughout.

Stepping up without tuning onstage, MacDonald played the air “Sgt. Ryan Russell, Forever in Our Memory” and followed with some swingy 6/8 marches, featuring “Bruce Gandy’s Farewell to the Iron Horse,” “Duncan McGillivray, Chief Steward” and “Farewell to the Creeks.” MacDonald noted that the slow air was in memory of Toronto police officer Ryan Russell, who was killed in the line of duty, and for whom their youth band program is named.

Without tuning again, MacDonald delivered “A Flame of Wrath” in a bold style, great contrast between variations and sparkling technique. His bagpipe was lovely. He pointed out that the “no tuning” was a requirement for the Edinburgh recital the week previous. It was a challenge that he clearly met.

Next was a big MSR set featuring a Reay MacKay tune named for MacDonald’s father, “P-M John MacDonald,” followed by the G.S. MacLennan classic “Inveran,” “Arniston Castle,” “The Piper’s Bonnet,” Donald MacLeod’s reel “Neil Angus MacDonald,” and “John Morrison of Assynt House.” One of the elements of a great player is being able to play well-known melodies and make them exciting, and MacDonald achieved just that— sparkly playing, keeping the tunes fresh.

There were a few hornpipes and jigs in the recital, and these were an absolute pleasure to hear. MacDonald has fantastic technique with a strong musical swing, and with the bagpipe locked down, he was putting on a display of control, accuracy and musicality that was just really fun to hear.

Next up was “Lament for Mary MacLeod” and it was completely enjoyable. He credited his teacher, Jim McGillivray, with his approach to this tune, saying he felt he never really played it just right unless Jim was conducting him through it.

Then into a big set of two-parted, traditional marches, strathspeys and some reels, including a ripping version of “Farewell to Erin” and the let-loose-the-crunluaths setting of “Reel of Tulloch.”

Finishing the way he started—with a memorial nod—MacDonald played an air that he wrote for his late father-in-law, followed by another splash of jigs, and a great finish with Gordon Walker’s “The Fiddlers’ Rally.”

This was an excellent hour of music, and the audience was enthusiastic in response. I really appreciated that MacDonald was able to convey something about himself through his music and presentation. Here’s a piper who appreciates his teachers, honours his colleagues and family, contributes to his community, and brings honour to the instrument with his mastery of the music.