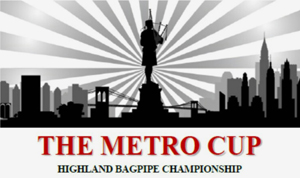 The professional contest comprises Piobaireachd and Medley events, each with a first-prize of US$1,000. There’s also the Pipe-Major George M. Bell Amateur Championship for the top six amateur pipers from each of the branches of the EUSPBA, and pipers from the Midwest Pipe Band Association, the Pipers & Pipe Band Society of Ontario, and the overall winner of the CLASP competition in the UK.

Professional pipers and the piobaireachd chosen for each of them to play:

The popular event features a silent auction, with funds returned to the event, which is also supported by regional pipe bands that organize workshops and recitals for many of the professional players.

Judges for the professional events are James Bell, Andrew Berthoff and Jim McGillivray.

The 2015 Metro Cup was won by Willie McCallum.