The Grade 2 MacKenzie Caledonian of Dundee, Scotland, will kick off its centenary year celebrations with “MCPB100,” two historical concerts February 9-10 at the 400-seat Gardyne Theatre in nearby Broughty Ferry.

Founded in 1918 at the end of the Great War as a group where returning soldiers could enjoy their music and meet to empathize with those who had endured the horrors of the previous four years, the “MacCals” and their Novice Juvenile “Mini-Macs” will showcase both their music and their history at the same venue they sold out in a 2015 show.

The Grade 2 band continued its surging competition success in 2017, finishing third in the Champion of Champions rankings. 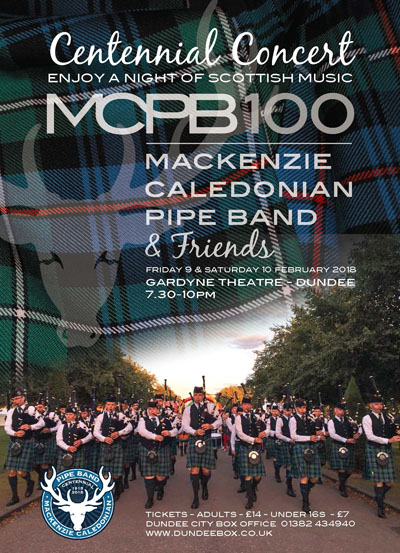 “It is important that we celebrate our centenary year in a suitable fashion,” said Neil Nicholson, pipe-major of the Grade 2 band. “We must applaud the achievements of previous players and supporters in the past who have enabled the band to reach this ripe old age and it is equally essential that we acknowledge the achievements of the current band who gained prizes in all the major competitions this year.”

According to concert producer and Grade 2 band snare drummer Islay Spalding, the concerts will not be entirely about piping and pipe band music. “We are currently finalizing our lineup, which promises to represent a broad spectrum of Scottish entertainment including some well-known faces.”

Among confirmed performers is Ross Ainslie, who is likely to play material from his new album, Sanctuary.

The band is also planning a celebration dinner later in 2018 at the Apex Hotel in Dundee, with representative of the RSPBA attending, along with a number of MacCal alumni.

Tickets for MCPB100 are already available from the band or via the online box office.

The bands are, like most this time of year, in high recruitment mode, and encourage inquiries. The Grade 2 band practices at the Michelin Social Club on Wednesday nights, and the Novice band at Craigie High School on Friday nights, both in Dundee.