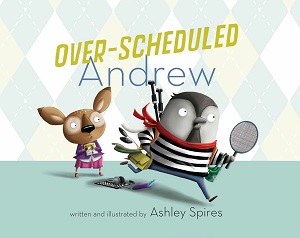 Award-winning Canadian children’s author and illustrator Ashley Spires recently published a new book featuring a very busy young piper. Over-Scheduled Andrew tells the story of a boy who loves to be involved in many activities, including piping and pipe bands, but struggles with an overloaded schedule.

Most piping and drumming teachers will be able to think of a pupil or two like that: “I couldn’t practice because I had basketball two days, then a soccer tournament on the weekend, and my piano exam on Monday, and then I do Irish dance on Tuesday.”

Spires is based in Vancouver and her previous book, The Most Magnificent Thing, has sold more than 100,000 copies and has now been published in seven languages, adding to critical and sales success going back over a dozen books and shelves full of awards.

It’s no accident that piping becomes a topic in this book, because Spires was a member of British Columbia’s vibrant piping community, hauled in through family connections, like many of us are. 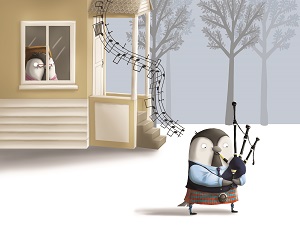 “Piping was a family thing,” said Spires. “Both my cousins were pipers and my sister and I were Highland dancers before we got into bands. My step-cousin taught me the tenor drum and I played with the White Spot Pipe Band and the Vancouver Ladies.”

As she progressed through high school and developed her interest in illustration, Spires eventually had to choose between art and pipe bands, and she left pipe bands to pursue a career in art school. Now back in Vancouver after stops in Toronto and Saskatoon, Spires is happy to be able to bring her pipe band experience into her work.

Although, not all of it. When asked to describe a memorable band experience, Spires remembered: “White Spot [Pipe Band] went up to Penticton Games one year and our hotel was ground zero for a city-wide riot. We had towels under the doors to stop the tear gas, and we listened to helicopters sweeping the city above us all night. One of the boys even woke up with a stranger passed out in his room the next morning. Good times.”

Spires now avoids pipe band riots, but can occasionally be seen at Highland games in BC, supporting friends and relatives who still play.

Over-Scheduled Andrew is published by Tundra Books and is available in good bookstores, and online.