Jason Briscoe, the web developer, graphic designer and piper with the Grade 1 ScottishPower Pipe Band, along with web developer Maël Sicard-Cras, a piper with ScottishPower, and graphic designer and Shotts & Dykehead Caledonia drummer Gleren Meneghin have recognized a worldwide appetite for “progressive” style pipe music – material not typically heard in traditional piping and pipe band contests – so they plan to launch an online hub that they hope will be popular with composers and listeners alike.

Unreel.fm will have no revenue stream planned and costs nothing to use. The developers hope to have go live online in February, but he says could be March.

So far he has several well-known composers on board, but currently wants to make public only Matt MacIsaac of Canada as a music-maker whose tunes and arrangements will be available at launch. 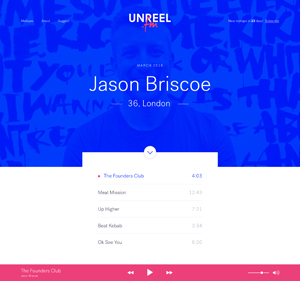 “Currently there’s no direct hub for a progressive style of bagpipe music, which the next generation is keen to listen to these days – unique, un-traditional, bold and brave,” Briscoe said. “The talent is out there as is the music – Lincoln Hilton as an example, but no centralized location packaged, designed and delivered beautifully.”

While the site is under construction currently, it is open for anyone to add their information to so that they can receive updates when new content is added. Briscoe said that he is working with several well known artists to record and post their music.

“[I’m] purely doing this as a passion project to inspire and engage a larger audience and younger generation,” Briscoe added. “The idea is to start discovering new talent through submission – less ‘big names’ in time but at the core focusing on innovative, tasteful approaches to bagpipe music.”

Since the late-1980s and the popularity of original music by pipers like the late Gordon Duncan, Allan MacDonald and Fred Morrison, there has been a growing trend toward unconventional music not made strictly for competitions in familiar structures and time signatures, geared almost strictly for entertaining performance. Today it is no longer assumed that young Highland pipers will focus on competing as the primary outlet for their music.

Originally from Ontario, Canada, Briscoe now lives in London and works as a graphic designer, and has worked on the brand identities of various piping products, such as ScottishPower Pipe-Major Chris Armstrong’s X-Treme line of reeds and publications.