Now hear this! Skye’s journey to hearing loss and treatment

Editor’s note: the following article is a personal story only. Readers are advised to always consult a physician or certified audiologist for professional diagnoses and opinion.

As a young boy, the allure of Highland pipes was like the siren’s call – constant, unrelenting, mesmerizing, and perhaps most significantly, damaging. When I answered that call at the age of nine or 10, it was initially to work on the practice chanter, until I got that first set of pipes around age 12. By 1970, I was playing tunes, continuing lessons, and having my passion for the music cultivated and nurtured by some truly wonderful characters of the Pacific Northwest piping scene.

Hearing protection was not only unheard of (seems like there should be a joke in there somewhere), but nobody ever even mentioned much about sound – aside from if your pipes were in tune – back in the day. As a solo competitor and later on in bands, it was just loud. It was part of the allure, I’m sure now, looking back. Words like “cacophony” or “brash” were sort of code for how loud the great Highland pipes (to say nothing of the modern pipe band drum crops!) truly were. I have no recollection of anyone using hearing protection at Macalester College in the pipe band there in the later 1970s, and into the early 1980s, the Abbotsford Legion band certainly didn’t have any.

On the exciting day when I was invited to join the Simon Fraser University Pipe Band in the early 1980s, it was all about getting a great sound, playing with some amazing players, and I never thought once about any sort of long-term damage I might be doing to my hearing. When I started with the band, those first practices were in a physical plant building, a concrete fortress with all the hard reflective sound surface anybody could ever imagine. The only thing worse than those band practices were some of the early spring competitions held in some ice rink in Port Coquitlam, British Columbia. The hard under-surface of concrete just bounced the chanter and drum tone right back up into your face.

In the mid-1980s, some very basic ear plugs started appearing, leading eventually to widespread acceptance as a smart protective strategy to help maintain and preserve hearing. For me, I would later learn, the longer-term exposure would have already taken its toll. Conversations became more difficult to follow, ambient noise in restaurants and similar places just made it more difficult to hear anything.

Now, to be clear, I certainly don’t blame anybody for over-exposure to loud noises (and loud music), because there just wasn’t mainstream understanding of the consequences, or frankly, the knowledge of what should be done about it even if you wanted to do something about it.

So a few years back, noticing (in a somewhat predictably stubborn way) that these hearing problems were not improving, I decided to get a benchmark test done. The results were clear, significant hearing loss in the higher frequency range. Undecided or perhaps unconvinced, I did nothing for a few more years, until toward the end of last year, noticing that my hearing had avoided my commands to “go forth and heal thyself,” decided another bench-marking made sense. Results were, not surprisingly, worse and correction was strongly indicated and recommended by the physician and audiologists who provided and interpreted the exams.

Significant hearing loss had occurred in the higher frequencies. It was then a question of what was to be done about it.

I was surprised to learn that hearing aids were not covered by health insurance, at least the policy we have, nor most, I’ve come to learn. Being confronted with spending several thousand dollars out-of-pocket was a serious and difficult decision. For someone who likes to believe himself to be a practical, if somewhat “thrifty,” individual, it took a fair amount of self-reflection to finally arrive at the decision to go ahead with it. The other choice for me came down to trying to save money and go the “on the cheap” route, or alternatively continuing to work through the ear-nose-throat physician and audiologist team that had administered tests and spent a lot of time working with me on options and how to address my unique situation.

Admitting it was time was the biggest step.

These are personal decisions, and by their very nature complex – it truly wasn’t a vanity issue in my case – it’s a problem that needed to be addressed. In that light, admitting it was time, maybe even past-time according to some in my household, was the biggest step.

The other thing is the current technology. Like all of my thrifty friends, nobody wants to buy the technological solution that was perfect and innovative . . . for yesterday. By the same token, for something as important as one’s hearing, I didn’t especially want to be on the “bleeding edge,” either. For me, the solution that made the most sense was a model that is “behind the ear” with a couple of small inserts, connected with tension wires that are virtually invisible. Apologies if some of my terminology isn’t technically correct, but you get the idea.

A custom profile for my unique hearing condition was created by the audiologist, with an app for my phone that allows me to discretely make volume and other adjustments that, frankly, I’m still learning about. There is some regular user maintenance required for the hearing aids in the form of cleaning and such, and I also selected a set with rechargeable batteries. So each night before bed they come out of my ears, get a quick once over, and recharge in their own charging station. 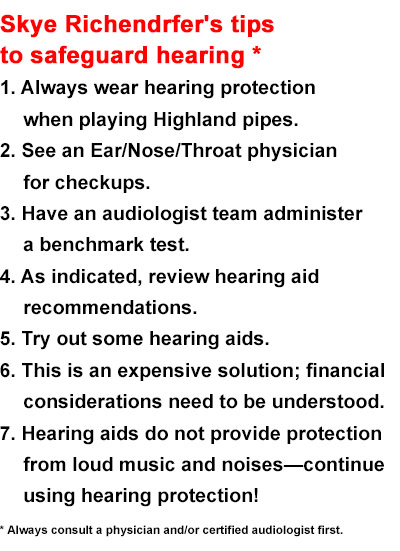 As for music generally and piping specifically, whistle playing, practice chanter playing – nae bother, as we say in Mount Vernon. However, with the default setting as currently configured, there is an imbalance created that is reminiscent of what it sounds like playing pipes beneath a circulating fan. So for now, it seems like the course will be to either use the phone app to turn the aids down/off for pipes (this phenomenon was also present when listening to pipe recordings) so I’ve got a few things to sort out still after a few weeks of having them. A tune-up trip to the audiologist was part of the program, and so that’s about a week off to get that sorted.

Importantly, turning down the volume does not provide hearing protection. Ear plugs are still an essential part to safeguard hearing.

For young pipers, I’m sure this might sound like yet another irrelevant old-timer’s story. However, the adage of “an ounce of prevention being worth a pound of cure” is certainly the case when it comes to your hearing. For the more wizened piper, I encourage you to at the very least benchmark your hearing, and make plans to address it in whatever way makes sense for you based on professional input from hearing specialists. It’s never too late to get started taking corrective action.

Skye Richendrfer is the executive director of the Mount Vernon, Washington-based Celtic Arts Foundation. He has played the pipes for more than 50 years.

Have you heard? It takes money and time to put together pipes|drums. If you’re not yet a subscriber, please consider purchasing a low-priced subscription or make a small donation so that we can keep pipes|drums coming to you. If you are already a subscriber, thank you!