Oban, Scotland – August 27, 2015 – The second day of solo piping competitions brought competitors outdoors to the Argyllshire Gathering Park on the outskirts of Oban for most of the light music events.

Alasdair Henderson repeated Craig Sutherland’s feat of 2014 by wining both the A-Grade light music events, catapulting him into the Former Winners MSR competition in future years. Henderson barely missed a perfect day, second only to Fred Morrison in the Jig event. Morrison also won the Jig contest in 2014. In the A- and B-Grade events, there were short leets of six created for a final contest. The judging benches were swapped for the qualifying rounds and finals.

As is tradition, the previous day’s winner of the Gold Medal, this year John-Angus Smith, led the march to games, starting from the train station and winding through the town. 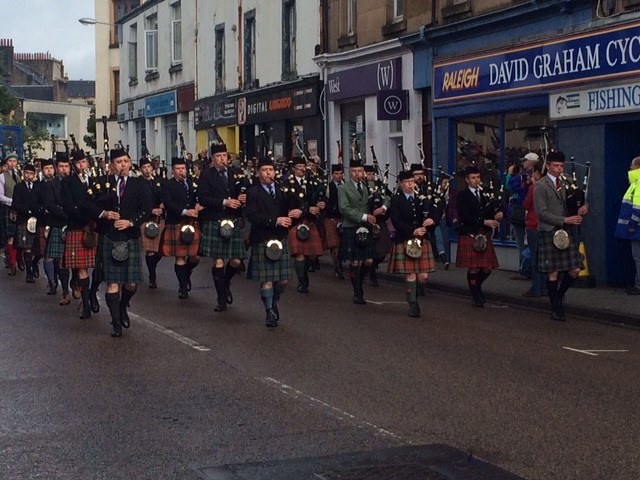 Weather was misty rain for the march to the park, and then heavy rain throughout the morning, giving way to warm sunshine with intermittent showers, making conditions trying, and not a little “demoralizing,” according to one contestant, for the world’s best exponents of the Highland bagpipe at one of the world’s most important events for the instrument.