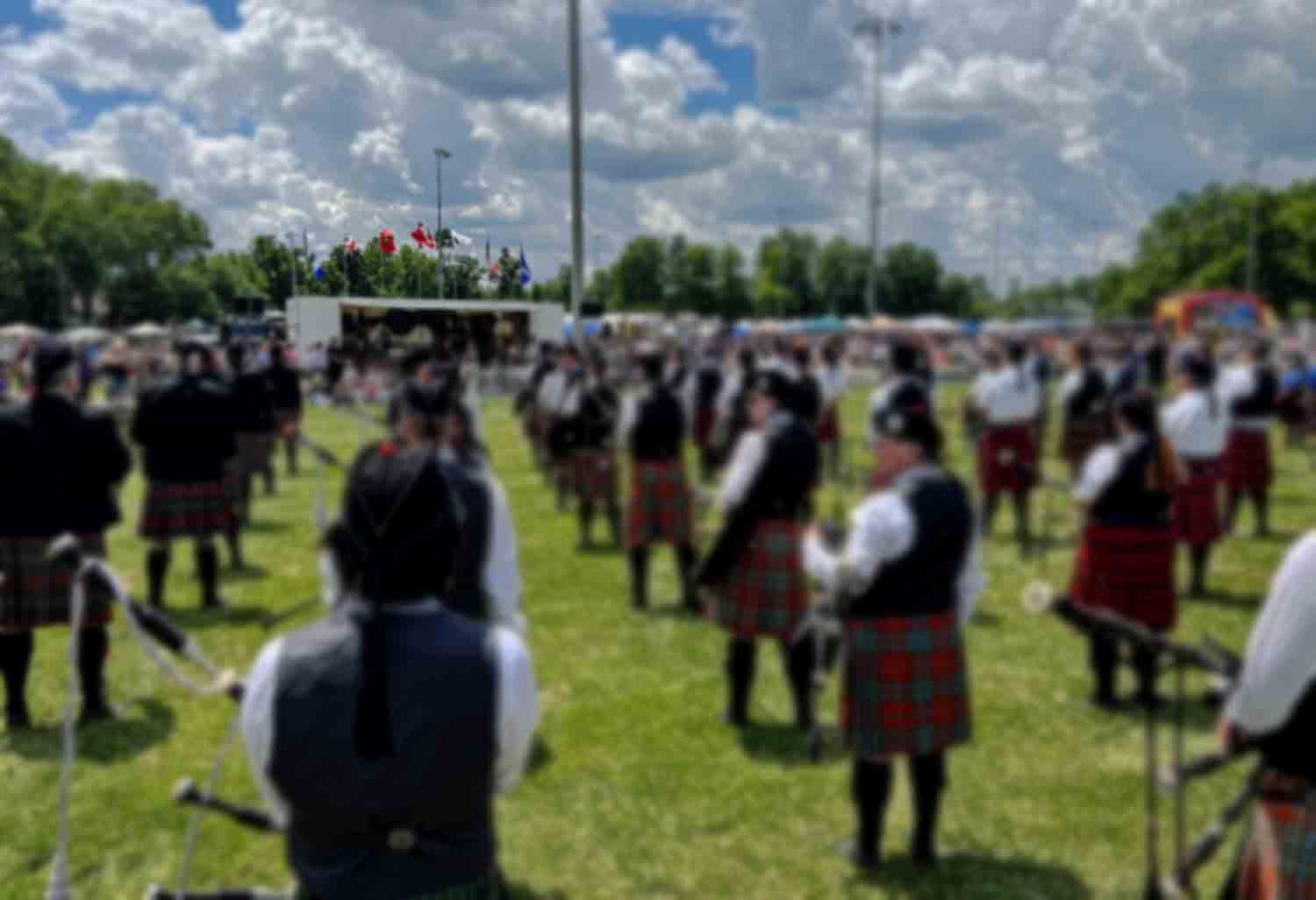 It’s One July, Canada Day,
So time for us to have a say
Reel off a rhyme or maybe two,
For all those Lees at SFU,
All them 78th Frasers,
Mustached Bill (who’s short on razors),
Bowen, Girling, Rollo, Liddell,
’87 not second fiddle.
We sing for Troys, Kenny Eller:
The Clan’s Captain – quite a feller.
All the Dutharts – Drew and Sharon,
Andrew Hayes’ pipes never blarin’.
Gail Brown is teaching all the bairns
And Peel moving up with John Cairns.
Red, white and red, the flag’s dandy,
So’s Halifax with Alex Gandy.
On the bass drum and you will know
On the beat is Cappuccino?
There’s Doug MacRae: his real work good,
As is Trish, Graham and James Kirkwood.
By now you might be quite annoyed,
Two words of cure: Andrea Boyd.
Canucks, you know, they can’t be beat,
With guys like Aumonier, Pete.
With some luck, you’ll hear “The Bicker”
From the hands of Jacob Dicker,
And place your bets, put down a nickel
On the talents of Zephan Knichel.
In Calgary we say Hooray
For Sean Somers and one Ann Gray!
MacDonalds teach in Reginer,
Those kids are good, nothing’s finer.
Sing of Stronach and Matt MacIsaac,
They’ve never had a bad attack.
Also think of those not with us,
Neigh and Mackay, on the dithis.
(We know that it’s pronounced gee-iss,
Can’t resist a rhyme to free us.)
They track sound like tonal sonar,
Reminds us of Andrew Bonar.
Turn up the volume to eleven,
For Alisdair, Alan Bevan.
Rob MacNeill, Triumph Street’s Senyks,
Here’s to thoughts of one Joe Rennix,
McKeown’s grips, Ian K.’s throws,
Maxwells’ flams, three-pace roll that flows.
Bev, Fraser and remember Bruce,
The tunes go with creative juice.
A hero’s Jim McGillivray,
He taught so many how to play.
This writing’s hard, it’s real tricky,
We’ll get composed with Neil Dickie.
Kingston cranks out players, oh boy,
Scott Bell does things at Rob Roy.
Colin, Kayleigh, Glenna Mackay,
James, Kylie, Briar, PEI.
Fisher, Stewart, Harvey Dawson,
Some more drummers would be awesome.
Bass and tenors here to try
Elliott, Hoss, Tyler Fry.
Blair, Glenn and Graham: all of them Brown,
Milton was once their wee home town.
And even if in Edinburgh-o
Jen Hazzard once lived in T.O.
Makes us think of one worth tellin’:
Why, of course: Colin MacLellan!
Maxville, Fergus, remember Guelph,
Winter’s hell; summer’s top-shelf.
So many names, far too much
To list all here, the country’s such
A vast place of piping, drumming,
Their massed bands will keep ’em coming.
We hope you like this in some way,
Have a happy Canada Day!