Imagine going to a concert. For old time’s sake, let’s say it’s the Rolling Stones. The crowd’s excited. The lights go down. Suddenly, Keith Richards nervously comes out on stage and, instead of the famous first riff of “Satisfaction,” he proceeds to tune his guitar. It was in perfect tune two minutes ago and likely will be again in a few seconds, but he must make sure it’s perfect before starting the song. And Keith has a bit of stage fright. He takes two, three, four minutes futzing. Ping-ping. Pling. Strum. Pick. Ping-ping. It’s interminable. The audience wonders, What the #@&% is he doing?

All musical momentum is lost. Even the roadies are bored. The crowd starts talking among themselves. The moment evaporates in a cloud of obscure and tuneless notes as Keef is in his little world delaying, delaying. Wait, we think he might be ready to start the song . . . but, no, he goes back to playing random notes, ping, pluck, ting, strum. Mick, Ronnie and Charlie stand around daydreaming. As he settles his nerves, the audience tunes out. They finally play the song, only to do the tuning thing for the next. And the next. And the next.

If that scenario sounds absurd, it’s because it is. But it’s what pipers do at every single competition.

Our tuning habit is a bizarre tradition that distances everyone from the performance. Our tradition of interminable tuning makes what should be an immersive musical experience into a challenge of patience and stamina.

Obviously, a Stones concert is not a solo piping competition. But they are both performances, and it is the performance that is the important common thread. We asked around, and couldn’t find any competitions for similarly temperamental reed and string instruments where the contestants are allowed to spend any time, let alone five or more minutes, tuning before their performance.

We pipers and drummers too often prefer perfection over performance. As they say, perfect is the enemy of good and, in our eternal pursuit of perfection and our intolerance for flaws, we lose innumerable potential fans of our music.

Who among us has not been with a non-piper at a solo competition who asks: “Has he started yet?” only to break it to your near-catatonic friend that, “No, he’s still tuning, so please stop talking.” By then, your friend has probably made up their mind never to attend another one of these boring things.

Synthetic reeds, bags, moisture-control gubbins, and other gizmos have resulted in instruments that are far more stable and reliable than ever. But the bizarre thing is that on-stage tuning is every bit as tedious as it ever was. Despite these massive advances in stability, pipers still insist on tuning, tuning, tuning as much as ever.

We can only conclude that lengthy tuning is simply a traditional stalling tactic. We teach by example that competitors must “settle” their nerves and instrument with endless random notes. Whatever you do, you must retune your drones, futz with tape, play their dreariest slow air or the least melodic bit of piobaireachd they know, just to buy time before they start their performance, forgetting that the tuning is also the performance. 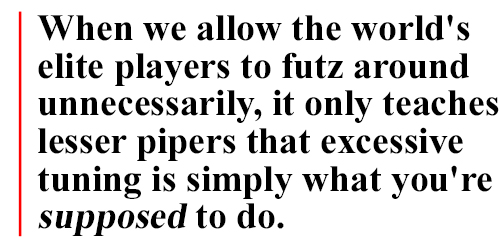 The most prestigious solo piping competitions in the world put a limit on tuning – a limit of three or four minutes. If you think that’s not a lot of time, try just sitting there for four minutes. It’s an eternity. Almost all of these top competitors use up every second of their time, and their pipe is rarely substantially better when they’re mercifully finally done than when they started tuning.

When we allow the world’s elite players to futz around unnecessarily, it only teaches lesser pipers that excessive tuning is simply what you’re supposed to do.

Pipers are already well prepared when they enter the stage; their instrument is or should be as ready as it can be. If the bagpipe falls out of tune during the performance, then so be it. Better luck next time.

Eradicating the traditional acceptance of tuning will make our music and events more accessible. Tuning confuses and alienates the audience. It can put the judge’s teeth on edge and, worst of all, makes the music secondary to a bizarre requirement for perfect tone that ordinary people do not understand. Our constant requirement that we can only perform on a perfect bagpipe spoils things for everyone.

Interminable tuning is not necessarily the fault of pipers. Judges generally place far too much emphasis on perfect tuning, so much that they let an imperfect instrument obliterate an otherwise excellent musical performance. When judges do that, then, of course, pipers will spend all afternoon trying to get their pipes perfect before they start their competition performance. Judges should adjust their priorities.

Pipers should approach the judge, confirm their tune (or better yet, dispense with this and have the steward handle it), sound their pipe for no more than 15 seconds and begin their performance. With those conditions applying to all contestants, everyone is on equal footing. If a bagpipe falls badly out of tune, them’s the breaks, so work on it for next time. As long as it’s closely (but not necessarily perfectly) in tune, we can still focus on the delivery of the music. We’ll keep listening. Everyone’s happy.

While there are no competitions in most regions, it’s a perfect time for pipers to rehearse this process. When practicing, test how long it takes for your pipe to maintain its tuning. Then stop for a minute – about the time it takes to walk up to the judge and tell them what you’re playing – strike up and, after no more than 15 seconds, play your competition material and see how well your pipes are and remain in tune. You’ll probably be surprised.

So, here’s our proposal: Change the traditional tuning habit. Tuning of more than 15 seconds needs to be banned, or at least severely frowned upon, or perhaps even docked against the overall competition performance.

Are there more important issues right now? Sure, but long-term perhaps the most effective and easiest change we can implement to make our piping events more enjoyable for all is to stop torturous tuning and put all focus on the performance.