Holy moly! Piping Live! Glasgow International Festival of Piping is upon us once again. It’s the centre of freakin’ piping and drumming universe. From across the oceans, you can just smell the char-broiled burgers wafting from the omnipresent smokey grill outside the National Piping Centre.

Piping Live! is the thing that makes us come back for the World Pipe Band Championships (and vice versa). It’s the straw that stirs the pint. It’s the fortification in your Buckfast. It’s the craic in the foundation.

Here are pipes|drums’ Picks of the Week that will be in Glasgow (and Edinburgh), August 10-18 . . . so put on your comfortable shoes, pack your brolly and prepare to be blown away.

The 53rd Annual Silver Chanter at the National Piping Centre features Callum Beaumont, Jamie Forrester, Finlay Johnston, Jack Lee, Stuart Liddell and Iain Speirs, winners of some of the major 2018 piobaireachd prizes. Pipers play a MacCrimmon piobaireachd assigned to them well in advance, so they’ll ken it well. Always a riveting experience, and performances at the Silver Chanter inevitably end up on enthusiasts’ list of all-time greatest piping memories. The first bag is struck at 7:30 pm. 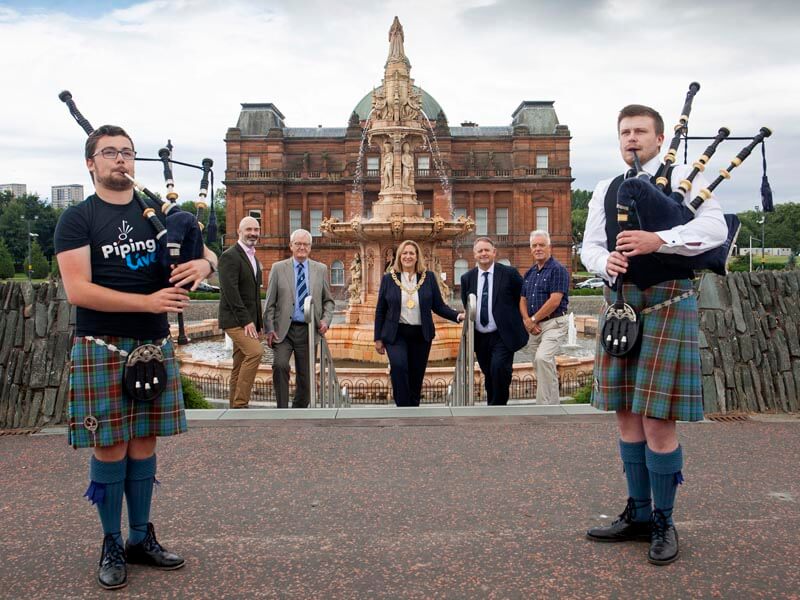 The Piobaireachd Society and the Edinburgh Fringe Festival offer a recital-style piobaireachd event with no tuning/warm-up on stage. The audience gets to experience eight different tunes with a break after four tunes. Pipers are Stuart Easton, the 2018 Oban Gold Medallist, Dr. Peter McCalister the 2018 Inverness Gold Medallist, Darach Urquhart the 2018 Oban Silver Medallist and Oban and Inverness Gold Medallist Niall Stewart. The venue is St Cecilia’s Hall, Edinburgh, so get on the train from Glasgow Queen Street station, and feel free to have a bevvy or two along the way.

The overall winner of this competition gains entry to the Glenfiddich Solo Piping Championship in October, and it’s always a great day of piping. The piobaireachd event begins at 8:30 am, and the MSR follows shortly after all the piobs are done. It all happens at the National Piping Centre. Hard core traditional piping here by the very best in the world.

Gig in the Gallery – Irish Piping

It’s all in the family when brothers Dr Angus MacDonald and Allan MacDonald, legends of their generation for their musical stylings, competition successes, and technical mastery of the art are in concert. Not often you’ll get to hear them together and, who knows, there might never be another opportunity. 1 pm.

This is always an intense night of piping for the performers, and excellent entertainment for the audience. Quartet piping is highly nerve-wracking and demanding, and 10 hidden judges decide the winner. Quartets are entered from 78th Fraser Highlanders (Canada), Canterbury Caledonian Society (New Zealand), Field Marshal Montgomery (Northern Ireland), Glasgow Police (Scotland), Inveraray & District (Scotland), People’s Ford Boghall & Bathgate Caledonia (Scotland), Shotts & Dykehead Caledonia (Scotland) and Simon Fraser University (Canada). This is always stowed out hoachin busy, so get your tickets ASAP or forever hold your Scottish sandwich. Pro-tip: cut out in the last part of the last tune of last band in the first half’s MSR to get a primo spot for a pint. You’ll be gasping for one by then. 7:30 pm.

Continuing the family theme, Jack and Andrew Lee perform a recital, and they will no doubt be performing on bagpipes, bags and reeds of their own making. That in itself is the stuff of Ripley’s Believe It or Not. This is likely to be a very entertaining hour of piping from the British Columbia father/son duo. National Piping Centre. 1 pm.

Well, it’s not official part of Piping Live!, but be sure to catch at least some of the organized mayhem that is Drumming For Drinks, one of the oldest and most established events at World’s Week. This is where pipe band percussionists let their hair even further down with some no-holds-barred performances that get more, um, “creative” every year. Also, we hear that 16-time World Solo Drumming Champion and gazillion-time major championship drum section winner Jim Kilpatrick will be playing the new Axial snare drum from the British Drum Co. Todd’s Bar at Strathclyde University. Starts at 1 pm and goes until everyone is either all drummed or drinked out.

The new workshop series at Piping Live! features host Gary West speaking with former SFU Pipe-Major Terry Lee, former Glasgow/Strathclyde Police Pipe-Major Ian MacLellan and former Polkemmet and Shotts & Dykehead Caledonia Pipe-Major Robert Mathieson about their lives in bands. The three pipe-majors have 23 World Championships among them, and they have one or two stories to tell! Aye, those were the guid auld days . . . five years ago. 3:45 pm.

It’s the biggest single pipe band show of the year, and Glasgow Skye Association has been staging the “Pre-World’s Concert” since the early 1990s, and this year it’s with ScottishPower, fresh off of their drumming win and second overall at the Scottish Championships. They say the concert is an almost certain bump up for the headliner. Here’s your chance to hear some potential history being made. If you don’t have tickets now, get a bend on – they’re almost all gone. Glasgow Royal Concert Hall. 7:30 pm.

A classic Piping Live! event that is always sold out, and always highly entertaining. Features four 20-minute mini recitals from Callum Beaumont, Finlay Johnston, Stuart Liddell and Angus MacColl. More “secret” judges in the audience calling the winner. This is the event that was the kernel of the idea of Piping Live!, when it started as an impromptu and ultra-casual thing at Strathclyde University’s Todd Bar. 7:30 pm.

Truth be told, there really isn’t a “bad day” at Piping Live! Be sure to check out the daily rounds of Pipe Idol (and the Grand Final on Thursday), the ongoing entertainment (scheduled and, erm, spontaneous) at the Street Café, National Piping Centre museum tours with Dr. Hugh Cheape MBE, Grade 1 band practices every evening at the NPC, and all the regular events, including a visit to the Festival Club after hours for relaxed tunes, a few quiet pints and whole bunch of craic.

If you’re one of the glitterati competing Saturday, you’ll be washing (or burning) your band socks and shirt, cleaning your brogues, or making that awkward speech at the band dinner. The rest of us will be at Drygate Brewery to hear Lunasa, Beolach, and the Asturian Ruben Alba Duo. Concert starts at 7:30 pm , and you have to be over 18 and already dropped for Saturday.

Be sure to catch the little pipe band competition at a patch of grass called Glasgow Green. We hear that several bagpiping and drum-drum bands have entered this year. We think it might catch on.

You could head over to the pub and re-hash the results, or you could stay fresh and hear Scottish folk legend Dougie MacLean in a piping-centric show at the Glasgow Royal Concert Hall. Would you rather hear off-key karaoke or Dougie? Hard call, we know. This will be just the right finish to a week of piping activity. 7:30 pm.

Many Piping Live! events are free, free, FREE, but for more information and tickets for events available from Piping Live!

pipes|drums is once again an official media partner with Piping Live!