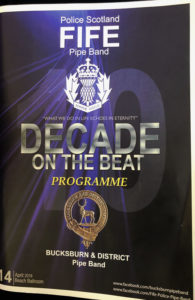 Bucksburn & District is one of Scotland’s oldest pipe band organizations, with thousands of pipers and drummers coming through its teaching system over the years. The band’s annual spring concert in Aberdeen has become a favourite since it started in 2011, each year bringing in a Grade 1 band to headline the show and share the stage with the Bucksburn bands.

This year it was Police Scotland Fife’s chance to shine, and, following a few minutes of very dramatic backing music and some great visuals, the band, led by Pipe-Major Douglas Murray and Lead-Drummer Mick O’Neil, started the night with the hornpipe “Archie MacKenzie of Dumbarton” followed by a very musical arrangement of Gordon Walker’s “Fiddlers’ Rally.” Both tunes were played at a lively tempo and provided a great start to what has become a regular event in the North East of Scotland pipe band calendar.

This was followed by a very well executed march, strathspey and reel, “Links of Forth,” “Atholl Cummers” and “The Smith of Chilliechassie.” A medley selection was next, beginning with “The Man from Skye” and ending with an excellent rendition of “John Patterson’s Mare.”

The band then left the stage and the audience was treated to a song by one of the band’s multi-talented pipers, Cameron Barnes, titled “Six Hard Times.” Cameron’s voice came across very strongly and was ably assisted by the band’s backing musicians.

It was then the turn of the drum corps, which showcased the excellent “Stevie’s Fanfare,” a salute to a young member of the band who unfortunately died in 2012. The fanfare was played with great enthusiasm and skill and was a fitting tribute. It was also good to see the tenor corps starting the fanfare on the stage on their own and showing their talents.

The band ended their contribution to the first half with a set of rocking reels.

Next on stage were the hosts, Bucksburn & District’s Novice Juvenile band, which played with great confidence and a good sound and were a credit to the great teaching program that is in place in the Aberdeen area. The performance included a drum fanfare by the drum corps, current World Champions in their grade, and deservedly so.

The second half started with the host’s big band, Bucksburn & District Grade 2, and a set of well-played hornpipes.

This was followed by a competition MSR and a set of 6/8 marches followed by their 2018 medley and then a tribute to an ex-member of their band, Jim Inglis.

Their final set was the highlight of their performance for me was a very well put together setting of Gordon Duncan’s “Sleeping Tune,” followed by the jigs “Boys of Ballymote” and “The Old Wife of the Mill Dust.”

This is clearly a band on the up and included in their ranks a young piper aged just 12 years old, another great testimony to their youth development set up.

Police Scotland Fife returned to the stage with a set that included the jig “Inspector Donald Campbell of Ness” and followed this with a set of traditional 6/8 marches, which were excellently played.

The band then moved into more relaxed mode with a set of reels followed by a quartet of pipers playing Phil Collins’s “In the Air Tonight.” This was not necessarily my cup of tea, but the band should be congratulated for their innovation and originality. The unexpected arrival of the band’s bass drummer dressed as a gorilla throwing sweets into the crowd during this set added a great sense of fun to the evening.

Next was a showcase of the band’s solo piping talent with Sharon and Christy Kelly playing a duet, followed by Euan Cameron, Cameron Barnes and Pipe-Major Dougie Murray, each playing excellent sets. Dougie left the stage with the audience wanting more.

It was then time for another song, this by one of the tenor drummers in the band singing the great Scots song “Wild Mountain Thyme” with accompaniment by Dougie Murray on pipes.

The band concluded their sets with a version of the slow air, “Classical Bob,” and a couple of reels followed by a set of jigs.

The band were then joined on stage by both Bucksburn & District bands for a finale of “Cock of the North,” a great Gordon Highlanders tune and an appropriate ending to a concert in the Gordon’s stronghold of Aberdeen.

The concert was ably emceed by the well-known Aberdonian character and piping judge Jim Campbell. His knowledge of the North East pipe band scene provided some interesting snippets of the history of the Bucksburn & District Pipe Band.

This was a fantastically put together concert and Police Scotland Fife, along with their hosts Bucksburn & District Pipe Band should be congratulated for providing a fantastic night of piping and drumming in the North East of Scotland.

Dougie Rennie has been a member of the MacKenzie Caledonian organization for the last 29 years, starting with Juvenile and now with Grade 2 band. He was taught piping by Ian G. Duncan. In addition to playing with Mac-Cal he is pipe-major of the Boys Brigade Pipe Band in Broughty Ferry, near Dundee, Scotland, where he lives.