Today’s ScottishPower concert to be livestreamed 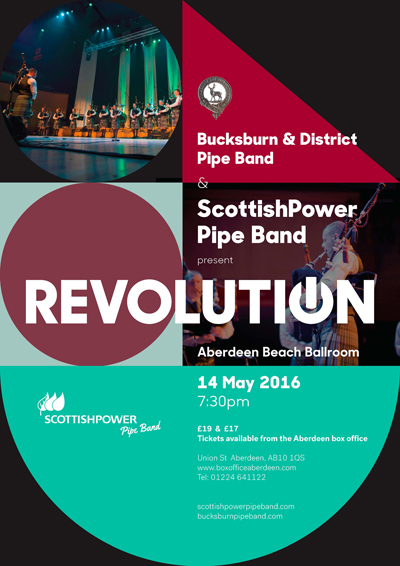 Today’s “Revolution” concert in Aberdeen, Scotland, by the Grade 1 ScottishPower Pipe Band of Glasgow will be livestreamed to the world for free beginning at 19:30 pm (GMT), according the band, after technical issues were worked out.

“We are delighted to kick-start our season with a concert tonight up in Aberdeen,” said ScottishPower Pipe-Major Chris Armstrong. “Bucksburn & District have done a great job in establishing this as a main event of the pipe band calendar and we are excited about playing in concert to a north east audience for the first time. We have worked hard over the winter months on a lot of new material and it’s great not only to be recording this tonight but also, as a first for ScottishPower Pipe Band, offering it out through the band’s Facebook page on livestream. We hope that the many supporters of the band from all around the world will now be able to join us and enjoy what is shaping up to be a great night.”

The concert is the sixth mounted by the Bucksburn & District organization, and has quickly become a pre-season preview of one of the top Grade 1 bands.

Each concert features the headline band, plus performances by the various Bucksburn bands, with all bands combining at the end of the show.

ScottishPower has placed heavy emphasis on the “Revolution” concert, even bowing out of its April trip to Norfolk to participate in the Virginia Tattoo and American Pipe Band Championship so that the band could concentrate on material for the show.

The headline band for the 2017 Pre-Season Concert has not been formally revealed, but it is strongly believed that a Canadian Grade 1 band will be announced tonight.