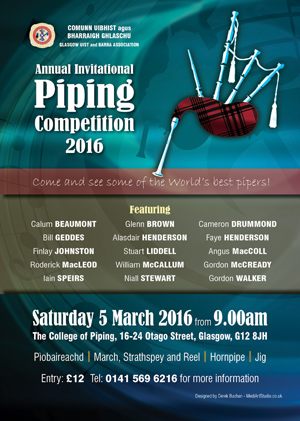 Nearly every major UK solo contest prizewinner in 2015 has confirmed attendance at the annual Uist & Barra Invitational Solo Piping Competition on March 5th at the College of Piping. Fifteen of the world’s best will vie for awards in the Piobaireachd, MSR and Hornpipe & Jig events throughout the day:

The Uist & Barra is traditionally the first significant solo event of the UK season, and its history goes back almost a century. The competition is put on by the Glasgow Uist & Barra Association.

Tickets are available in advance from the College of Piping and are priced at £12.

Judges for each of the three events are Ian Duncan, Stuart Shedden and Andrew Wright.