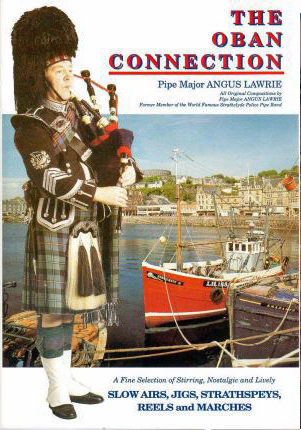 The accomplished piper, composer and pipe bag maker, Angus Lawrie, died on December 8, 2018, at the age of 88.

Born in Oban, Scotland, in 1930, Lawrie completed hi national service with the Argyll & Sutherland Highlanders, and was a member of the Grade 1 Glasgow/Strathclyde Police Pipe Band during the 1960s and ’70s under pipe-majors Ronald Lawrie, his cousin, and Ian McLellan.

Angus Lawrie penned more than 300 tunes, the most well-known of which are the 4/4 march, “The 1976 Police Tattoo,” the hornpipe “Old Toasty” (Ronald Lawrie’s father’s nickname), and the march, “Dugald Gillespie.”

After retiring as a serving police officer, Lawrie was pipe-major of the Grade 1 Britoil in the 1980s, the band that was previously named Clan Campbell and, before that, Red Hackle. After Britoil folded, he was pipe-major of Johnstone, which at the time was a Grade 3 band.

Angus Lawrie published a collection of his music, The Oban Connection, in the 1980s, and his sheepskin pipe bags for a time were among the most widely played.

On behalf of the piping and drumming world, our sympathies are with Angus Lawrie’s family and many friends at this sad time.