Editor’s note: On April 1, 2016, Major Archie Cairns, recipient of the Order of Military Merit (MMM) and Canadian Forces Decoration for 12 years’ service (CD) four times over, died at the age of 87. Cairns’s contributions to piping and drumming were significant, and one of his prize-winning pupils, Fraser Clark, a captain in the Canadian Forces, kindly stepped up with this recollection of and tribute to his mentor and friend. 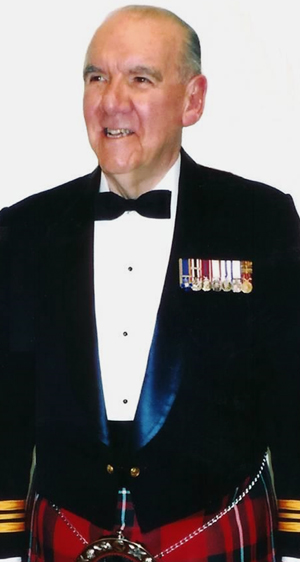 If the late Gordon Highlanders Pipe-Major George Stewart MacLennan is sometimes compared classical composer George Friedrich Handel for his natural gifts in composition, then the pipe band community lost the J.S. Bach of the bagpipes this past week. The death of Archie Cairns marks a milestone in the history of piping not only here in Canada but also in the greater global music community.

Archie’s genius was universally acknowledged and often overlooked, yet less widely known was Archie the Man, the Musician, and the Soldier. He became an unequalled resource of infinite depth whose talents were perhaps more greatly appreciated outside his native Ontario in the last quarter century than we in central Canada may care to acknowledge today.

Archie’s departure almost certainly marks the end of a generation of musicians who could draw a direct line to an era of early 20th century piping and drumming where the open double-stroke five-pace roll ruled the roost and where piping and drumming adjudicators – everywhere – notoriously gulped the grog at the games prior to rendering questionable judgments in all manner of sobriety. Archie was there and saw it all.

In his own way, Archie was a Canadian nationalist who self-identified with the Canadian Armed Forces until the day he died. Even his obituary highlights his rank: Major. But how could it be otherwise? He was born and raised into the Canadian Army, its regimental identity, and was its unwavering champion right up to the end.

Archie’s identification came by way of two streams: heredity and through the blood of his father’s experiences on the battlefields of the First World War. His father, Pipe-Major John Knox Cairns of the Argyll & Sutherland Highlanders of Canada (Princess Louise’s), was a veteran of the 19th Canadian Infantry Battalion, one of three Canadian Arygll battalions whose soldiers fed more than 5,000 regimental men into the bloody cauldron on the Western Front.

If you’re familiar with Canadian Corps history, you’ll probably know the iconic image of Canadian troops marching into defeated Germany as they salute their commander, General Sir Arthur Currie, in December 1918. The pipe band keeping the troops in step is the 19th, and there stands Archie’s dad, in the ranks, clad in Government Tartan kilt and battle dress tunic, rain and sleet pelting down on the troops as the pipers and drummers stand perfectly still, freezing their fingers off for the victorious Canadian jocks. For Archie, the battle honours of Vimy, Passchendaele and the Pursuit to Mons – where Archie’s dad and his brothers-in-arms gave their all – made indelible impressions on the young piper. And it was likely through his father’s wartime experiences and the role he later played as a senior leader in the post-war Argylls that molded Archie’s lifelong commitment to perfection and service to Canada.

Too young to serve in the Second World War, Archie witnessed many of his elder band-mates deploy overseas while he remained at home . . .