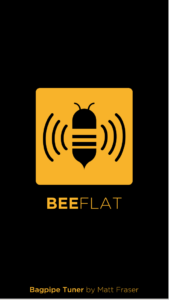 A new $12.99 bagpipe tuner has been launched on Apple iTunes by New Zealand piper Matt Fraser. The BeeFlat Bagpipe Tuner has been in development for some time by the professional software developer, whose piping background includes playing with the Grade 1 Inveraray & District and competing in high-level solo piping events, including the Silver Medal. When he lived in Scotland for five years.

Now living in Melbourne, Australia, Fraser said that he had more time “to make my perfect tuner,” which he said is accurate to less than 0.1 of a cent, with a simple interface and the ability to view a “real-time history of the pitch so that you can account for fluctuations in blowing.”

Fraser configured the app to include pitch-detection algorithms that tailor to “temperament” and “tonal” qualities of specific instruments in various reed combinations, including band and solo modes. The solo mode allows for more sensitive tuning of high-A and the B 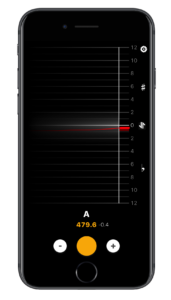 notes, in what Fraser labels the “Roddy high-A” and “Lidd B,” in an attempt to help pipers achieve those singular note-qualities of Roddy MacLeod and Stuart Liddell, respectively.

The BeeFlat tuner has a reversible scale for tuning drones, and is configurable to show pitch in 440->460 range or 470->490 range, depending on preferences.

Since the Grade 1 Guelph Pipe Band first used them in the late 1970s, chromatic tuners have become standard equipment for both competing bands and soloists, greatly contributing to the steady improvement of pipe section tone quality and consistently, particularly with drones. The Korg company of Japan was the first to market a hand-held tuner designed specifically for the Highland bagpipe.