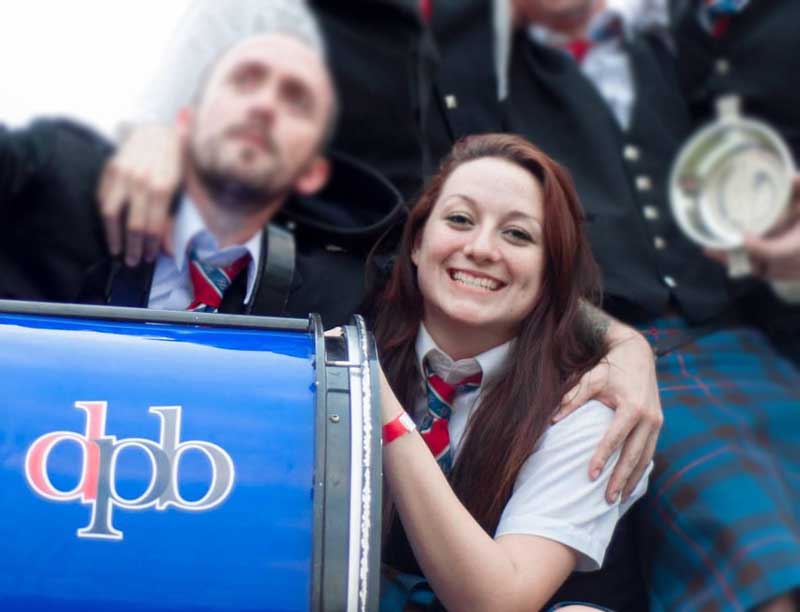 Brandi Harris of Palm Harbor, Florida, a tenor drummer with the Grade 1 City of Dunedin Pipe Band of Dunedin, Florida, was killed in an automobile crash on the morning of February 19th. She was 30 years old.

Harris learned tenor drumming through the Dunedin city school pipe band teaching program, rising through the organization’s several groups to become a member of the top band in 2019. She had been planning to travel with the band to compete in Grade 1 at the World Championships this August.

She was also a drum-major with the Dunedin High School Pipe Band and played several instruments in the University of Central Florida Marching Band.

You didn’t have to be around her all of the time to be her friend. – City of Dunedin piper Jamie Everett

Popular with her band mates, Harris was known for her engaging and outgoing personality, and an outpouring of grief and tributes have been posted on various social media properties.

“From the outside in, Brandi was a lovely person. Witty, fun, and always seemed to be giving out little personal compliments that made you feel better. You didn’t have to be around her all of the time to be her friend. It’s simply unfortunate that her family and all of us have lost her,” said City of Dunedin piper Jamie Everett.
Harris had been travelling with a friend, Jeremy Rinehart, 32, who also died in the Palm Harbor incident. According to news reports, they had been stopped at a stop sign when a car driven by an 18-year-old male from Palm Harbor collided with them at high speed.

We extend our sympathies to the City of Dunedin pipe band organization, and Brandi Harris’s many friends and family at this difficult time.