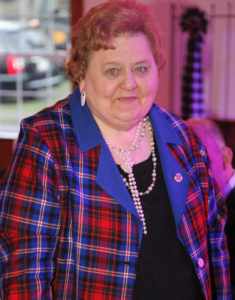 Connie Blaney, whose name was synonymous with the Glengarry Highland Games at Maxville, Ontario, has died at the age of 83.

She was secretary of the games from 1983 to 1988, then vice-president for two years, and then president from 1991, continuing a director and past-president until she died.

Connie Blaney was an accomplished piper, and in the first year of the Glengarry Highland Games she won the under-18 piping contest, and was known at the time as one of the best female players in North America.

“Respected for her many accomplishments in the community and in the piping world Connie will be missed, and her contributions to the Games will never be forgotten,” said current Glengarry Highland Games President Anne Stewart. “Connie was a trailblazer, whose determination and success as a young female piper competing on the Ontario circuit in the 1940s and 1950s enabled future generations of women, including my eldest daughter, to play and compete at the highest level of piping and in pipe bands worldwide. Her smile, her laugh, her knowledge . . . Connie is irreplaceable and we will miss her terribly.”

Under Blaney’s leadership, “Maxville” moved from being good-sized piping and drumming event, to becoming the largest event in the world in terms of separate solo piping and drumming and band competitions, contestants and attendance. Crowd estimates over the two-day early August event typically exceed 50,000.

Details of the memorial service and funeral are available from Munroe & Morris Funeral Homes.

On behalf of the piping and drumming world, we extend our sympathies to Connie Blaney’s family and friends at this sad time.