Duncan returns to the Vale 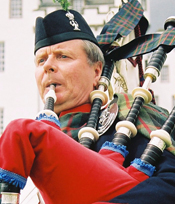 Ian Duncan is returning to the Grade 1 Vale of Atholl Pipe Band – the group that he led to greatness – after an 11-year absence. He will rejoin Robert Wiseman Dairies-Vale of Atholl as a playing member of the pipe section, and the band will continue to be led by Pipe-Major Adrian Cramb.

Duncan departed the Vale in 2000 under reportedly acrimonious circumstances, joining ScottishPower for two seasons before becoming Pipe-Major of the Drambuie-Kirkliston Pipe Band, which he brought to Grade 1 status before sponsorship withdrawal forced the band to fold.

For the last two years he has led the Grade 1 Lothian & Borders Police Pipe Band, maintaining its position in the top grade before giving way to Neil Hall, who became Pipe-Major after the 2011 season.

“Neil played an instrumental part in the restructuring of Lothian & Borders Police into its present state,” Duncan said. “I am now happy to leave Neil and [Leading-Drummer] Jake Jorgensen to take the band forward, while I cut back on travelling and go back to my local band the Vale of Atholl, a band with which I obviously have long and deep connections. I am excited to be back and am looking forward to being able to support Adrian in any way he feels I can help.”

Duncan cited travel as a primary reason for the return, since Vale of Atholl practices in his hometown of Perth.

“I’m sure that his experience and his presence will give us all a tremendous boost,” Cramb said in a statement to pipes|drums.

During his 36 years with Vale of Atholl, Duncan brought the band from a fledgling Grade 4 learner group to a championship-winning Grade 1 band, which made its biggest mark in the 1980s and ’90s, known for creative medleys often inspired by other forms of Celtic music.

In 2009 Duncan was named Scottish Music Tutor of the Year by the Scots Trad Music Awards.