With many pipe band associations holding their annual general meetings in the next few months, it’s a good time to consider exactly what your association is doing for piping and drumming, not in terms of competition-running machinery, but what, if anything, they are doing to further and build the art.

There is no denying that pretty much everywhere outside of Scotland, most pipe bands are struggling to field numbers and meet standards. While one Grade 1 band pipe-major recently described to us the current pipe band scene in most of Canada as “apocalyptic,” it might not be quite that bad, but it’s pretty dire.

As an example, 30 years ago, Ontario seemed on top of the pipe band world. It boasted a band that reimagined what pipe band music was all about, and became something of a musical model to which bands around the world, even those in Scotland and Northern Ireland, would aspire. It was a golden era for the province in terms of music.

In teaching and sustainability . . . not so much.

Why is it that almost every pipe band association leaves it to their member bands and individuals to organize the teaching? While associations have well recognized a decline in numbers and standards, they have sat on their collective sporrans, hoping that things will just magically get better, with little or no support for cohesive, unified and standards-based teaching programs.

We raised the issue and suggested potential solutions 13 years ago (Associations need to teach to compete), but not much has happened.

To be sure, there has been a lot of talk, talk, talk. Everyone might have acknowledged years ago that a problem was looming, but every time we heard of a teaching initiative being attempted, it got delayed, derailed or deleted by elected leaders who too often see their role as caretakers, rather than as, well, leaders.

The Royal Scottish Pipe Band Association, to their credit, has worked to do something about the problem the UK pipe band scene faced 10 or 15 years ago. The RSPBA developed a standards-based program that it rolled out, and it organized workshops and a “college” that at least proactively worked to solve a recognized decline. Add the hugely successful program for state-run Scottish schools, and piping and drumming in Scotland is enjoying a massive renaissance.

British Columbia is another success. The British Columbia Pipers Association worked with the province to have piping and drumming teaching and testing applicable to high school credits. While the number of pipers, drummers and bands does not seem to have increased appreciably in the area, standards appear to have at least kept up.

There are other small initiatives. Nonetheless, if associations embarked on substantial and effective teaching programs today, the results will not be realized for at least another four or five years. During that time, standards in Scotland in particular will be that much better, and lagging areas will have that much more work to catch up. But, there’s no time like the present. 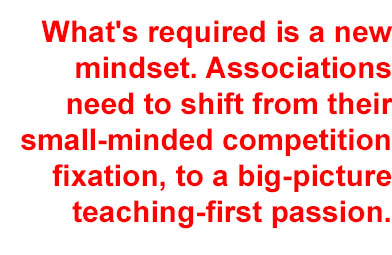 Why an association would not consider a fulsome teaching program a top priority is beyond us. They will often cite money, but there are creative ways to manage the cost. Work with sponsors, seek state/provincial or federal funding, apply for grants that are available within the music industry. Instead of constantly raising membership dues and contest entry fees for no apparent return to members, how about explaining that 100% of the next increase will go towards a teaching program, so that anyone interested can receive free instruction on a loaner chanter or practice pad from qualified teachers who are compensated for their time and expertise?

We bet that such a socially responsible sustainability program that costs each individual member, say, $5 (or $50 for a band), will be welcomed for the common good of the art and the common health of the competition scene. Rather than slipping in another levy on dues and entries with no apparent return, we can all step up together to offset costs of a program managed by the association.

To be clear, we are not suggesting relatively superficial things like an annual weekend workshop with fancy instructors, or a lecture to individual teachers and bands on how to teach, although these things are good. We’re talking about associations holding weekly free group lessons in strategic locations for anyone who wishes to start piping or drumming. Teach them for six months, get them hooked on the allure of the instruments and the scene, and then let them go off to join a band and get private tuition.

Leaving teaching solely to pipe bands generally results in those single bands reaping the benefits. It becomes a survival-of-the-savviest. It might sustain a single pipe band organization, but the rest of the region is a wasteland.

What’s required is a new mindset. Associations need to shift from their small-minded competition fixation, to a big-picture teaching-first passion. Teach well and widely, and your membership base and playing standards will increase. If it’s what the members want, the competition part will thrive.

Safe to say, the rest of the world will never be able to match the national teaching program that’s working so well in Scotland. It’s Scotland’s national instrument, after all. If piping and drumming regions outside of Scotland want to have a chance of keeping up with standards, decisive and rapid action must be taken now.

Associations need smart, creative people with the courage and tenacity to push forward, bureaucratic naysayers be damned. We don’t need any more caretakers. We need leaders.

Time is running out.