‘Free Your Mind’ – an exclusive excerpt from ‘Finding Bagpipe Freedom’ 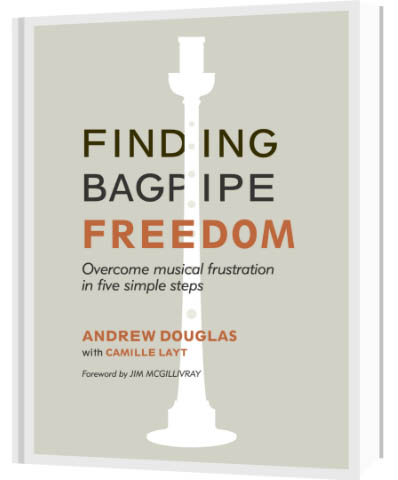 Finding Bagpipe Freedom is a new self-help book for pipers by Andrew Douglas. The book is available for US$29.99 starting on July 4th.

“This book is targeted primarily at intermediate pipers who are ‘stuck,’ and encourages readers to re-think their approach to the music via the methodology we’ve developed at the Piper’s Dojo over the last 10 years,” Douglas said.

Here’s the second excerpt, chosen by Douglas, to give you a taste of the 245-page Finding Bagpipe Freedom.

“And the funny thing was that people who weren’t entirely certain they were right always argued much louder than other people, as if the main person they were trying to convince were themselves…” ― Terry Pratchett

I played a heavy D throw for the first 18 years that I was a piper. If you’re unfamiliar with the difference between the two varieties of the D throw species, a light D throw is a three-step embellishment, and a heavy D throw contains an extra low-G, making it four steps.

For most pipers – and, dare I say, for most pipers out there who are ‘faking it until they make it’ to something resembling Bagpipe Freedom – this issue seems petty and trivial. Ostensibly, we’re just splitting hairs here about whether to play an embellishment with three or four steps. Honestly, who cares, right?

To this day, I still don’t really care whether a student plays a light or a heavy D throw (but just play light, would ya?), as long as it’s played accurately and evenly. So why is it, then, that I switched from heavy to light at age 26 or so?

When I was pipe-major of the Oran Mor Pipe Band, trying to lead the band up from Grade 2 to Grade 1, it became apparent that we were going to need a clear playbook – a repeatable system – for creating unison in our group. Refining and perfecting the concept of ALAP/ASAP came out of this realization. Rhythmic accuracy, short-note fusion, and what would become other key ‘Dojo concepts’ were also part of the system.

I’ll pull no punches here – what most people were really doing was playing an ‘amorphus pile of shite D throw.’ You know, the one where you just wiggle your fingers and hope for the best.

Eventually, just one sore thumb stuck out; a missing piece where I couldn’t just tell a player, “This is how we do that.”

And that was, as you may have already guessed, the D throw. Unlike other embellishments, the game plan wasn’t clear for it. Some people played the ‘light D throw.’ Some played the ‘heavy D throw.’ Why do I put those in quotes? Because, and I’ll pull no punches here – what most people were really doing was playing an ‘amorphus pile of shite D throw.’ You know, the one where you just wiggle your fingers and hope for the best.

And, let me be clear here – my own D throw was possibly the worst of them all. I remember Jack Lee mercilessly ribbing me for years about this very issue. So as I sat down to figure out how exactly we should approach the D throw to actually be able to create unison together, I realized – what I was doing was completely not controlled, not repeatable, and certainly not teachable to others.

Ultimately, I bit the bullet and made the strategic decision to strip out all heavy D throws and teach every player to play a light D throw.

I myself had to stop playing the heavy version cold turkey, and retrain myself to play a light version, before teaching the band to do the same.

Why did I ultimately choose this game plan? Well, a few reasons really. Firstly, heavy D throws are sluggish and complicated, and harder to get every player in a band playing in perfect unison. Secondly, D throws with three steps (instead of four) fit musically better in the vast majority of musical scenarios. The rhythm of a light D throw fits most tunes better than a heavy one, any day of the week.

So, what does this demonstrate? Well, as we all know, in the wide world of bagpiping there are many ways you can skin the Scottish octopus. I would have sworn as a young player that the heavy D thow was ‘the way to go,’ but now, through experience, trial, error, and instruction, I have found there’s a better way (in my opinion). But I also know that while I think it’s better, others disagree and prefer to play a heavy throw – and that’s ok, as long as the decision is made in the spirit of developing the control you need to produce your own best music.

As in any pursuit, the best thing you can do is approach everything in piping with an open mind – and a healthy dose of cynicism about the source of your information . . . but more about that in a moment.