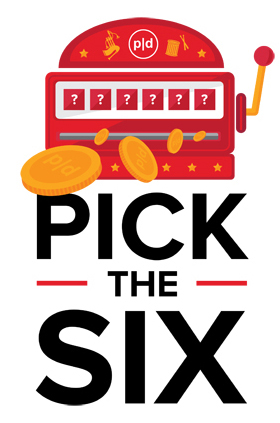 Gary Duignan of Zuccoli, Northern Territory, Australia, is the winner of pipes|drums’ 2018 Pick The Six contest!

Gary’s entry got the top-six finishers in the Grade 1 Final at the 2018 World Pipe Band Championships in their exact order.

Actually, Gary’s entry was the one randomly drawn from a record 15 entries that had the result spot-on – far more than any year in the history of our annual contest. We put all of the correct entries in a hat, and Gary’s name was the winner.

Typically, there are only one or two entries that get the result exactly correct, but this year, perhaps due to the same six bands that featured in the 2017 list making up this year’s top-six, there were an unprecedented number of correct entries.

The other canny folks who got it right on:

Well done to all 15 of these far-flung perceptive pipe band prognosticators! (Special credit to Sandy McKail for also predicting that St. Laurence O’Toole would win the drumming, but, by the rules, that did not help him in the contest. Perhaps we will add that element next year as a tie-breaker . . . )

To refresh your memory, here are the World’s results:

Many thanks to the more than 3,100 entrants to our contest, and of course to our savvy advertisers who know a good marketing opportunity when they see one!

Take a few minutes to browse through the wealth of goodies that Gary Duignan receives – you, too, can get any or all of the items . . . but you’ll need to pay. Be sure to support all pipes|drums advertisers!

And a one-year membership to the BagpipeLessons.com Studio (value $316), which includes exclusive access to hundreds of hours of exclusive lessons, tunes, recordings, and the Learn the Pipes online video course for beginners.

Lee & Sons Bagpipes – any pipe bag of the winner’s chosing (sheepskin, cowhide, goatskin or sheepskin premium). With or without zippers and grommets. Retail price $479.

National Piping Centre – a voucher for dinner for two at the Pipers’ Tryst restaurant – three courses per person from the Scottish Market Menu pus a bottle of red or white house wine! Retail value $86.

Reelpipes.com – a $100 credit on purchases from Reelpipes.com, purveyors of great piping and drumming stuff.

That’s $3,655 worth of prizes for Gary! Congratulations again!