Getting Back At It: we survey band leaders on competition return and other shutdown issues

As vaccines are rolled out around the world, the piping and drumming world collectively hopes that a return to in-person competitions will be not just possible, but realistic and safe.

Unless there’s a surge in cases in Australia and New Zealand, we’re talking about the Northern Hemisphere. Great Britain and Ireland have been hit hard by COVID-19 and, at the writing are struggling to emerge from lockdown situations. Most of Canada has not fared much better, and the United States is also grappling to get things under safe control.

It’s one thing being able to schedule a Highland games or pure pipe band championship for the summer, hoping that large gatherings will be allowed by then. But whether competing bands will have had enough time to get up to adequate playing strength is quite another matter. Add to that possible travel restrictions, mandatory COVID testing, quarantines, and there are numerous unknown variables.

But what do affected pipe bands think?

We set out to ask pipe-majors and lead-drummers of the Northern Hemisphere’s Grade 1 and Grade 2 bands for their opinions on a range of questions, from getting back at it, to playing requirements, to how well their associations have supported them during the pandemic.

We elected not to include Australian and New Zealand bands, since the situation down under is dramatically and enviably different, with most bands currently able to practice and compete.

The response was very good, with 64 leaders completing the survey. We promised to use data only collectively, not attaching any information to specific people or bands. We invited them to provide written verbatim comments to most of the questions, again with the proviso that their name will not be included.

While we hope that those who speak are willing to put their name to their words (and many are), a survey like this has to be anonymous to be successful. The piping and drumming world is improving, but it is still politically charged, and the majority errs on a cautious side, speaking only on the condition of anonymity. As we said, open dialogue is increasing as associations and judges become more tolerant, receptive and thicker-skinned when it comes to the opinions of their own members.

pipes|drums also wants to provide a service to associations, which generally seem to have a hard time asking the members anything remotely controversial and, when they do, pipers and drummers might not trust the association to keep their information confidential.

We have also found that many event organizers, including even from some of the biggest contests in the world, have little understanding of the depth of preparation that bands undertake to be competition-ready. Some assume that pipe bands simply turn up and play. The results of this survey might help them, too.

Unfortunately, we have not compiled a list of leaders of the world’s hundreds of lower-grade bands. We appreciate that their opinions might be different from those at the top. In the meantime, we hope your association seeks your views.

We started with two questions to establish 1) whether the band was Grade 1 or Grade 2, and 2) in what country their band is based.

The breakdown of bands’ countries of origin:

Just click on any of the charts below for a larger view.

(Pardon the interruption, since if you’ve made it this far you’re probably enjoying this article. But now’s maybe a good time to ask yourself how much you like reading this and other free pieces from pipes|drums. Perhaps you already subscribe and support your favourite nonprofit magazine and, if so, thank you. But if you haven’t yet subscribed, please do so that we can continue to keep features like this – which take a lot of time and not a little money – coming your way. You can subscribe or donate here.)

Question 3: How much in-person practice time will your band need to get back to an acceptable competition performance standard?

The total of all respondents shows some 64% say “Three or more months,” while 27% said “Two months” and the rest “One month.” Not one pipe band leader said “Less than a month.”

Interestingly, these numbers are right in line with the numbers (as of Feb. 7th) on our pipes|drums Readers Poll currently available on our front page: 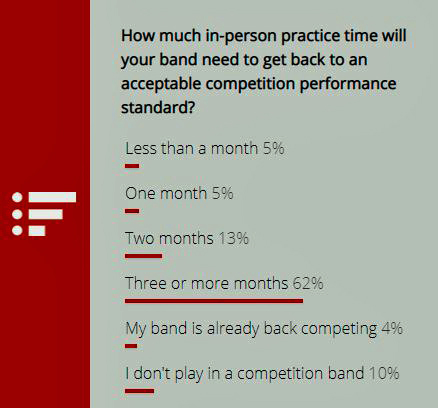 Back to the survey of top-band leaders, broken out by Grade 1 and Grade 2 we see substantially more Grade 2 bands needing Three months or more:

And for bands based in Great Britain, Ireland and France, the numbers fairly match overall data:

And leaders from bands based in Canada and the United States, about the same:

Question 4: Do you think associations should reduce competition requirements to allow bands to return to standard faster?

Our next question sought to understand views on whether associations might lighten the load on bands returning by reducing playing requirements. Here’s the total of all respondents, with about two-thirds feeling that there is no need.

And the same question broken down by Grade 1 and Grade 2 leaders’ responses, showing slightly more Grade 1 bands thinking a reduction would be good:

There was no real variance based on country of origin.

Here are some of the verbatim comments on the idea of reducing musical requirements:

Question 5: Are you willing to accept playing to a lower standard in order to return to competition?

Okay, so we all want to get back at it as soon as possible, but are competing bands willing to perform at a standard less than what they are capable of producing? We all know what we can produce, but perhaps it’s worth it to sacrifice quality for mere participation.

And comparing Grade 1 and Grade 2 the numbers are fairly consistent across the grades, as well as country-to-country:

Question 6: Would you like to see new contest playing format(s) (e.g., longer anything goes medleys) to allow for more creativity?

We have written about the silver lining opportunity that the pandemic might present when it comes to rethinking or experimenting with competition musical formats.

Overall, the feeling is literally 50-50, with exactly half of the respondents welcoming musical change, the other half wanting the status quo:

Broken out by grade, we see leaders from Grade 2 bands more conservative than those from Grade 1 where 55% want musical change.

Bands from Great Britain, Ireland and France are fairly equally divided on the idea:

There’s more openness to change with bands from North America:

Let’s have a look at some of the verbatim comments to this question:

Question 7: When competition returns, should judges place less emphasis on precision and more on musical performance?

Okay, so, with bands coming back and maybe not being in top form, is it an opportunity for all judges to shift their dominant ear to the music rather than the strictly technical? Of course, every judge out there will say he or she always listens to both music and precision in equal measure, but few if any competitors will believe it. They see judges routinely pouncing on mistakes and matters of tuning, appearing to ignore the big picture.

Here’s what all respondents combined said, with 62% fine with the same judging methods, perceived or real:

Showing Grade 1 and Grade 2 leaders separately, more from the ultimate grade prefer maintaining the same approach, while slightly more in Grade 2 would like to see a leaning to music by judges:

When we go country-to-country, there wasn’t much deviation in results.

Some verbatim comments to this question:

Question 8: Do you think your association has done enough to support its member bands during the pandemic?

About 18 months have passed since the last full pipe band competition in the Northern Hemisphere. We thought it would be interesting to hear thoughts on how leaders’ home association has responded during the crisis.

Overall, slightly more than half said that their association has not done enough:

When we separate out Grade 1 and Grade 2 we see a sizable difference, with 65% of Grade 1 band leaders feeling that their association hasn’t supported them enough, while only 41% of Grade 2 leaders said the same:

When we look at British, Irish and French bands specifically, only 26% think their association has supported them enough. That’s a strong criticism from three-quarters of respondents:

And here are the numbers from the North American band leaders, who pretty much flip the UK/French data:

Some verbatim comments to this question follow and, interestingly, we received substantially fewer comments here:

Question 9: As things stand now, do you expect your band to compete in 2021?

Ultimately, the big question of whether leaders anticipate actually getting out to compete this year. Remember, the survey was conducted between January 28th and February 7th. Things are changing week to week. But here are the overall totals from that point in time, with only a quarter of leaders optimistic about a return to competition this year:

Broken out by grades, not too much deviation from the overall totals, but slightly more optimism from Grade 1: 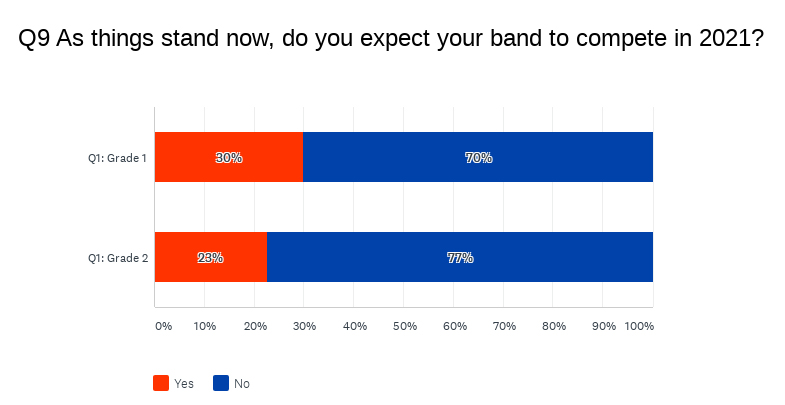 Looking at UK and French bands only, we see only 17% thinking they’ll compete in 2021:

And North American bands are overall more optimistic, perhaps driven by bands in areas that might be opening up a bit faster. It’s a large geographical area:

Lastly, we invited respondents to say whatever they’d like to the overall subject of the survey. Here are a few verbatim comments:

Thank you to all of the Grade 1 and Grade 2 band leaders who helped with this survey. Only by asking questions can we get information, and only by listening can we make good decisions. We encourage you to keep the dialogue going, and please use our comments tool to provide your thoughts.

One thing is unanimous: we all hope to get back to in-person competition as soon as it is safe and practical to do so.