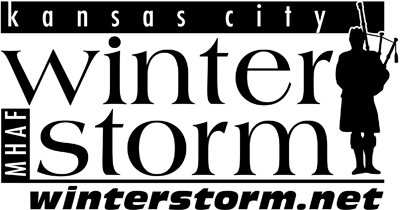 Kansas City, Missouri – January 13, 2018 – The seventeenth annual Winter Storm solo competitions drew their biggest entry yet, with more than 200 pipers and drummers competing in professional and amateur events. Alastair Lee of Coquitlam, British Columbia, and Zephan Knichel of Surrey, British Columbia, won the professional piping Gold and Silver Medal events in piobaireachd, respectively, while Sarah Muir of Glasgow took the professional light music against a staggering 48 other contestants. In the professional snare drumming, Grant Cassidy of Glasgow won the Gold Medal after a qualifying round. Andrew Elliott won both Gold Medals in the Professional Bass and Tenor competitions.

Competitions were held at the Kansas City Marriott – Country Club Plaza hotel. Many of the events were streamed live throughout the day. Winter Storm is organized by the nonprofit Midwest Highland Arts Fund.

The professional light music had 49 contestants between two qualifying rounds, with six from each group selected for the final. Qualifying rounds were judged by Ken Eller and Richard Parkes for group A and Ian K. MacDonald and Fred Morrison for group B.