Montreal gets fashionable with return of quality downtown piping

There was some outrage in 2017 when the Ogilvy department store in Montreal’s bustling downtown discontinued its tradition of a piper playing at lunchtime during the holidays, but four years later and with the merger with fashion-forward Holt Renfrew, the tradition has been restored with a stylistic twist.

Jenna Dennison, a competitive piper and former pipe-major of the Grade 4 Montréal Pipes & Drums, has been awarded the gig, and kitted out with a designer’s take on traditional Highland dress: “a modern approach including a bespoke, magenta tartan that respects the storied, Scottish tradition. The magenta kilt represents the colours of Holt Renfrew Ogilvy and was created by Canada’s premier kilt maker, Burnett’s & Struth Scottish Regalia Ltd. and registered with the Scottish Register of Tartans. Along with the kilt, Dennison will be styled with seasonal fashions, currently available at Holt Renfrew including a blazer by Canadian brand, Smythe, a Chloe bag and Doc Martens boots,” the department store outlined in a statement.

The Holt Renfrew Ogilvy performances will be for special events and holidays, and frequency will depend on Covid-19 restrictions, Dennison said.

The return coincides to some extent with her own return to piping after a “piping-induced throat injury” in 2013 caused her to stop playing for nearly five years.

“I took a long break while I focused on grad school instead, and eventually decided to have another go at piping, making sure to ease back into it gradually, consulting with a laryngologist, an osteopath, and piping instructors as I went,” she said. “I’m much more mindful of my technique now, and thankfully it’s paying off.” 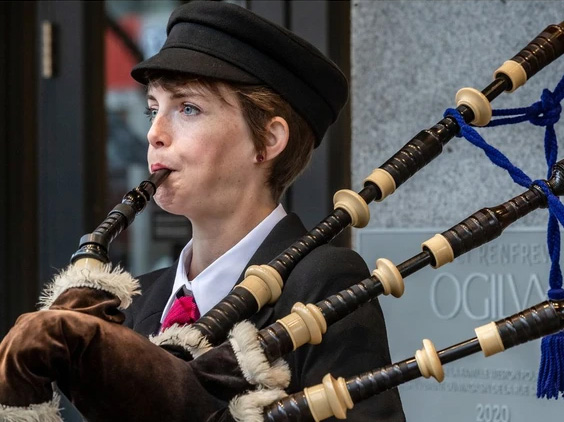 Pre-pandemic, she was gaining prizes in Grade 3 amateur events, and has been successful in online contests during the pandemic. “The lockdown was such a cultural vacuum, I started recording from home, and even took a few private lessons with Stuart Liddell to stay motivated. I never would have dreamed of such a thing a few years ago. It’s amazing how small the world has become.”

“We are very excited to bring back the traditional bagpiper at Holt Renfrew Ogilvy with a fresh approach,” Natalie Lord, divisional vice-president and general manager of Holt Renfrew Ogilvy. “After a tough few years we can’t wait to launch our new tradition and celebrate with our customers while honouring our past and spreading some holiday cheer.”