New book on piobaireachd not just for pipers 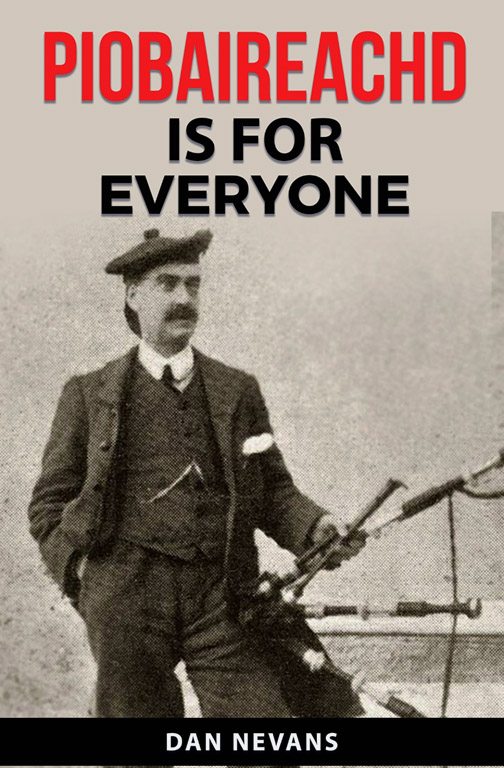 With a publication date this August, the emerging Scotland-based piper Dan Nevans has written Piobaireachd is for Everyone, a book that he says is about the history and development of the great music of the Highland pipe and its culture rather than a tutor.

“A reader will gain context for the world of ceol mor performance, both competitive and in concert,” he commented. “My intention was to provide anyone with the information to appreciate how the music is performed and why it is performed this way. I wrote it as a piper for anyone interested.”

The book will be available in paper and digital formats, and he is planning to have an audiobook ready at publication time via his website.

He provided an excerpt from Chapter 13 of Piobaireachd is for Everyone, “20th Century Boys”:

In the play “Twelfth Night,” William Shakespeare says, “Some men are born great, some men achieve greatness, and some men have greatness thrust upon them.” Any of these three statements can be used to describe both Donald MacLeod and John MacLellan. Both pipers not only maintained the line of Ceòl Mòr tuition and performance as it was taught to them but also used the contemporary technologies of the time to extend their teaching reach. Donald MacLeod and John MacLellan were highly decorated pipers, composers, and teachers.

Pipe-Major Donald Macleod MBE is one of the best-loved composers from the 20th century. Born on the 14th of August 1916 in Stornoway on the Isle of Lewis, Donald took his early piping from his father Donald “Doyle” MacLeod who was the Pipe-Major of the Stornoway Pipe Band. Donald was only four years old when he started piping. Quickly showing promise, Donald fell under the mentorship of John Morrison of Assynt House.

When Donald was six years old, he benefited from lessons with Pipe-Major Willie Ross. Ross was touring the Isles in the summer months on behalf of The Piobaireachd Society. Willie would reward the young MacLeod with a square of chocolate every time Donald completed a new piece from the book or played a piece correctly from memory. Willie Ross’s fatherly approach would differ greatly from the mentor Donald would take his music from for 25 years.

In 1924, Pipe-Major Willie Ross stopped touring the Isles and Pipe-Major John MacDonald MBE of Inverness was sponsored by John Morrison of Assynt House to make regular visits to Stornoway to support the pipers of Lewis. The relationship between the two got off to a rocky start with Donald returning home from his first lesson with MacDonald in a rage, vowing never to go back in the over dramatic way only a child can. John MacDonald’s well-earned reputation for discipline and straightforward feedback was quite different to the “parental” nurturing Donald had previously received.

Nevans is from Airdrie, Scotland, and was one of the members of the first National Youth Pipe Band of Scotland. He has a degree in Applied Music from the University of Strathclyde and Level 8 certification from the Piping and Drumming Qualifications Board. He’s played with several Grade 1 bands, competes as a B-Grade soloist, and is a teacher with the National Piping Centre.

Pricing for various formats of Piobaireachd is for Everyone has not yet been determined.