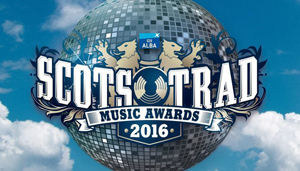 The North Lanarkshire Schools Novice Pipe Band and the 2016 Piping Live! Glasgow International Festival of Piping were named Pipe Band of the Year and Event of the Year at the 2016 Trad Music Awards held at Caird Hall in Dundee, Scotland, on December 3rd.

The annual awards honour the best in Scottish traditional music, and most of the categories are decided by a public vote after nominations are shortlisted.

In the Pipe Band of the Year category, North Lanarkshire Schools was up against Johnstone, winners of Grade 2 at the World Pipe Band Championships; surging Grade 1 band Police Scotland Fife Pipe Band; and the Novice Stirling & District Schools Pipe Band.

Piping Live! won against the Orkney Folk Festival, Mairi Campbell: Pulse, and the Hamish Feature Film Premier at the Glasgow Film Festival. Piping Live! was cited for attracting some 40,000 visitors to this year’s festival and bringing in millions of pounds to the Scottish economy.

The Celtic folk band Breabach, which features Calum MacCrimmon on Highland pipes, won the coveted Album of the Year award for their Astar release, and later the band was awarded the Folk Band of the Year prize.

pipes|drums was again the official media partner of Piping Live! in 2016.