One non-UK/Ireland judge on Grade 1 Qualifier

Despite an apparent record 36% of bands competing in the Grade 1 qualifying rounds at the 2018 World Pipe Band Championships not being from Great Britain or Ireland, only one judge not from the UK or Ireland has been assigned to the events to be held on August 17th at Glasgow Green, Glasgow.

Ken Eller of Ontario, Canada, is the lone judge not from the UK scheduled to judge the qualifying rounds. There are four Canadian bands, three from New Zealand and one each from Brittany and the United States planning to enter the contest. The only judge from New Zealand on the RSPBA panel is Brian Switalla, who judged Grade 1 in 2017 and who this year has been assigned to the Grade 4A final.

With some nine bands not from Great Britain or Ireland saying that they are planning to compete at the World’s, overall entry should go to at least 25, making it one of the largest Grade 1 competitions in many years.

Strictly speaking, the RSPBA categorizes bands from the Republic of Ireland, such as the Grade 1 St. Laurence O’Toole, as “overseas,” since the group is a member of the Irish Pipe Band Association.

The competition will see several RSPBA judges making their World’s debut, including former Boghall & Bathgate Caledonia Pipe-Major Ross Walker, who, along with former Field Marshal Montgomery piper Mark Faloon of Northern Ireland, are going straight into the fire, each given piping in the Grade 1 qualifying rounds. 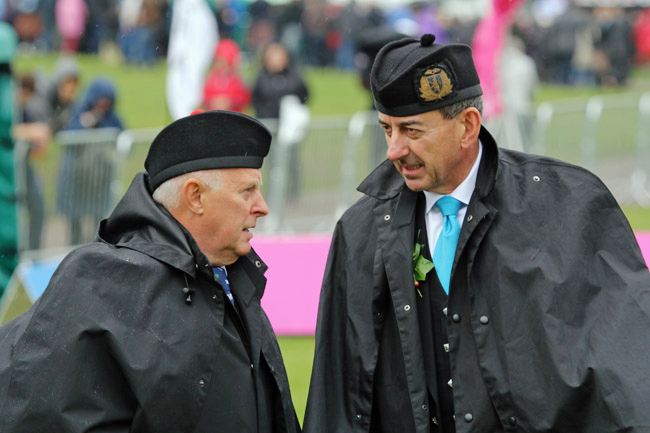 The RSPBA’s Judging Allocation Group comprises Chief Executive Ian Embelton as its chair, members of the Adjudicators Panel Management Board, John Wilson, Robert Mathieson and Peter Snaddon), two from the association’s board of directors, and two RSPBA adjudicators who observe the process, who had no input, but watched the process to ensure fairness and transparency.

The RSPBA rescinded its rule that disallowed immediate family members from judging their kin. This year no fewer than three Grade 1 judges have family ties.

According to details from sources close to the organization, the RSPBA provides overseas judges with an additional £150 for travel to major championships, above what it would normally pay to those on their own panel: a £110 fee, £100 for accommodation, and £20 per meal, plus mileage expenses for travel with their own car. Return economy airfare from New Zealand to Glasgow in August would typically be around $2,000-3,000 (£1,200-1,700).