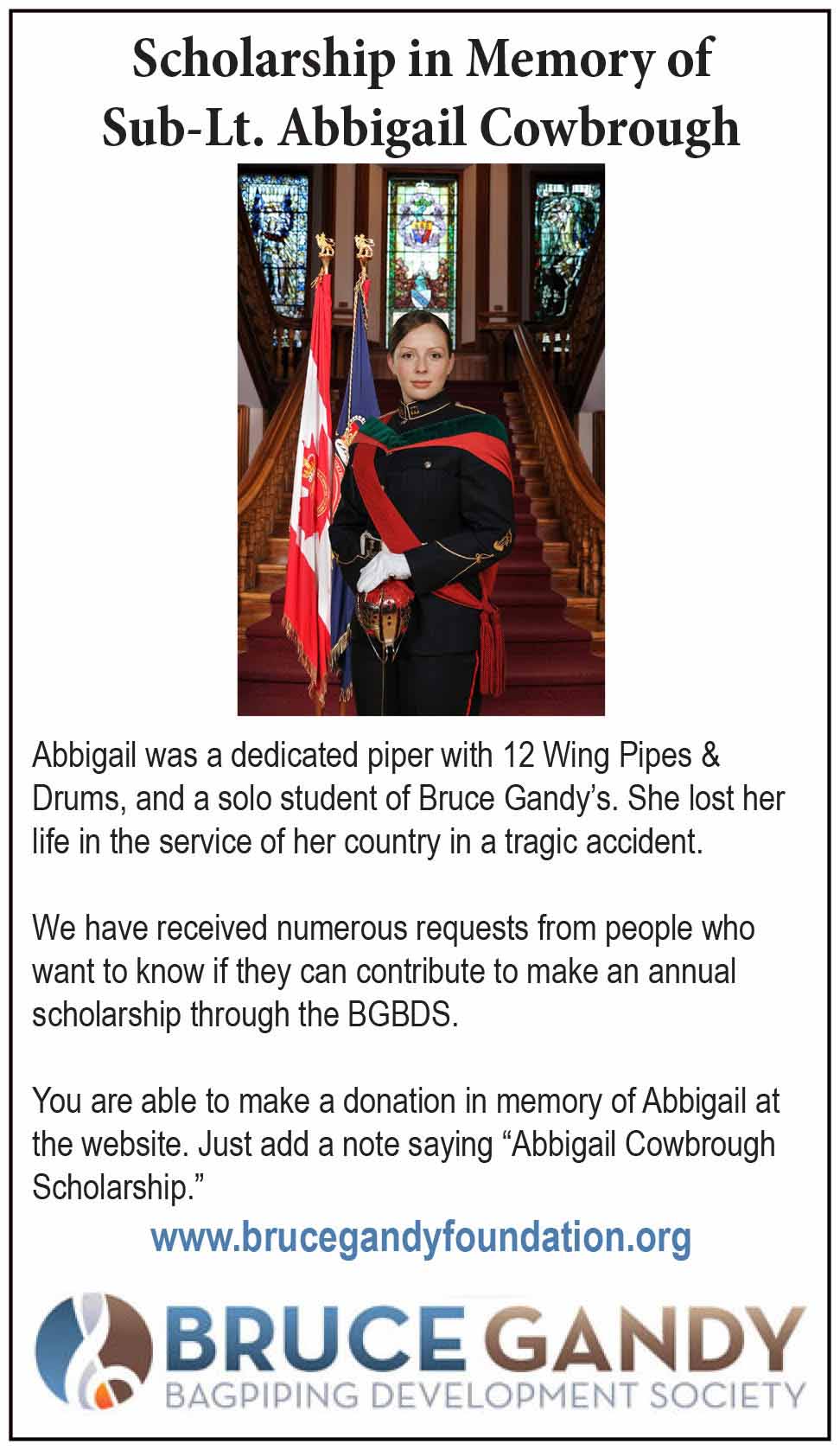 The Bruce Gandy Bagpiping Development Society is creating a new piping scholarship fund to honour Abbigail Cowbrough, the young piper who died in the line of service to Canada in a helicopter crash in the Mediterranean on April 29th.

The scholarship will be administered through the Bruce Gandy Bagpiping Development Society, a registered charity, which is hoping for donations to put towards the memorial grant for a deserving piper. Gandy confirmed that 100% of donations go back to the piping community.

“We’ve been able to give away some tuition scholarships for the past few years now and as soon as this happened a week ago, I felt strongly that we needed to put a name to one of our scholarships for each year,” Gandy said. “I cleared it with our board, and then I spoke with Abbi’s parents. I asked her mom, Tanya, for her blessing and permission to do that. I hope that we can continue to get people to go to the site to make either a one-time donation or jump in and subscribe to the site for as little as $5 month recurring, which a few have and with luck we will raise enough money to keep this initiative alive for years to come.”

Cowbrough was a sub-lieutenant and crew member of the Halifax-class frigate HMCS Fredericton. She was on duty onboard the helicopter when it crashed. The cause of the crash of the Cyclone helicopter is not yet known. Five other crewmates also died in the surveillance operation disaster.

“Abbi was a very bright, extremely fun and positive young person,” Gandy added. “She was just 23. I met her at a little workshop we were doing and took her on as a student. We got her out of Grade 4 pretty quick and into Grade 2 where she did very well at the few contests she was able to get to, as she had been away sailing for a good part of last year. We were getting ready for the Grade 2’s this year, and she was starting to make a bigger contribution as a skilled player to the 12 Wing Shearwater band.

“I looked forward to her coming over for lessons. We always had a cup of tea, and then we’d work on new tunes on the chanter and play the pipes also. Any time I told her it just wasn’t good enough, she would just look with a near-anger at herself and say, ‘Sorry, I”ll have it next week.’ And you knew she would have it better. I remember telling her I was proud of her for the work she did, her involvement in her church and that she didn’t take anything for granted, she just worked for it. On her own, she bought a house here last fall. I had always hoped she would be around as another good female role model to help some of the other young girls. Definitely a special person and I am deeply saddened that she is no longer with us.”

The Bruce Gandy Bagpiping Development Society was started by Gandy in 2012 and has consistently raised money for scholarships for deserving piping students from various parts of North America through contributions, donations of products and services.

The nonprofit pipes|drums has made a financial donation to the Abbigail Cowbrough Scholarship fund.