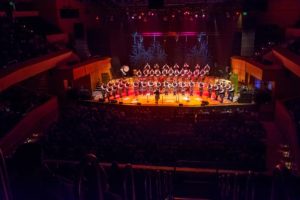 [All photos by Alister Sinclair and copyright pipes|drums – just click each image to enlarge.]

Only those who have played in or been involved in a pipe band concert truly know the time and effort involved. Putting one on is surely a labour of love. After all, the financial rewards are not massive and, when balanced against all the effort, why do they do it? Throw into the mix the timing of the pre-World’s concert, just before the biggest major championship of the year, and you may be right to assess that those who step up to the plate could be a few sandwiches short of a picnic. 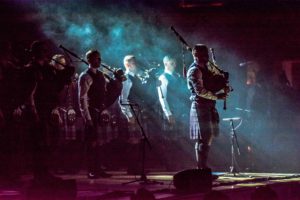 But year after year bands take it on and we are grateful that they do. Occasions to showcase a band’s talent are relatively rare and the public are as keen as ever to hear what is on offer and what new musical innovations may come their way.

Band members and support artists have to learn and prepare a massive repertoire and manage concert practice while not neglecting the big prize on Saturday. The pressure is immense. Sound, tone, acoustics, public expectation, the thing is being recorded . . . and so it goes on.

The ScottishPower Foundation became the title sponsor of the band in 1989 and is currently led by Pipe-Major Chris Armstrong and Lead-Drummer Jake Jørgensen. Donald Mackay is the pipe-sergeant.

So it was no surprise that Armstrong arrived late on the Monday evening prior to Inveraray Games somewhat frazzled. I and a few friends had arrived early, been out for a nice meal and were enjoying a nightcap in the bar when in came the ScottishPower pipe-major who uttered these words: “Band practice.” Nothing more needed to be said as he checked in and headed for the hay. No nightcap for him. Yes, a labour of love indeed. 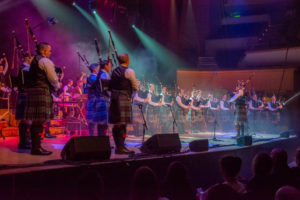 A near-capacity audience waited with great expectation and the Fear an Tighe for the evening, John MacKay, the Scottish television presenter, set the scene for the evening’s entertainment. I was seated in the upper tier of the Glasgow Royal Concert Hall in the middle, facing the band head on. I know from past experience at this venue that seat allocation is key, as the acoustics are not kind if you do not get a favourable listening position. 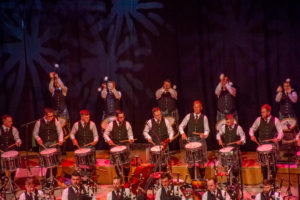 The band took to the stage with 26 pipers, seven tenors, bass drum and 10 snares that on occasion went up to 11. The pipers were to the fore, snares behind them and tucked behind them the row of tenors.

The band got off to a rip-roaring start with a slow suite then straight into some foot-tapping jigs. Some marches followed and the band were booming. Excellent tone and the finger work was impressive, to say the least. Over recent years I have been impressed with ScottishPower’s musicality and clever arrangements of tunes, and tonight was no exception. 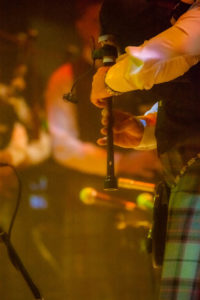 For me, the 10 snares were too powerful and I had to really listen carefully to pick out the delicate tenor accompaniment, thus I felt a loss of ensemble during some of the performances. Excellent flourishing though was good to see and added to the show.

I must make mention of the “Archie Campbell” medley as the opener. “Archie Campbell of the 51st Highland Division,” composed by Captain John MacLellan, is not often heard. The tune was composed by the Captain for Archie who was the long time secretary of the Highland Division dinner club. A great tune and led to a top class medley that of course included the timeless “Lament for Mary MacLeod,” which has become a bit of a signature piece for the band. 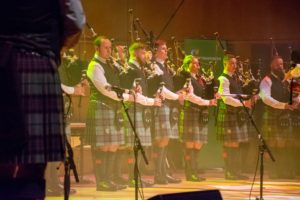 A couple of soloists, Callum Moffat and Robbie MacIsaac, gave the band a break, and I almost enjoyed Robbie’s pre-tune interview with John MacKay as much as his playing. When asked why he had selected the tunes he was about to play he said something like, “Nae idea but they’re gallus.” Even those unfamiliar with the Scottish vernacular got what he meant. Indeed, 18-year-olds have no fear.

The band came back on and played what for me was probably the first half highlight, the Donald MacLeod piobaireachd, “Queen Elizabeth II’s Salute.” (MacLeod’s revised collection was launched this week during Piping Live!). It was well arranged, well played and full of music. It had a Big Music Society feel about it and, with John Mulhearn involved, I guess that was no surprise. I really enjoyed it. 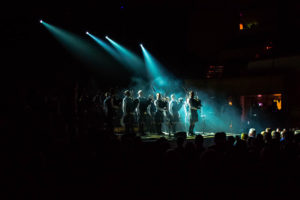 The band took us through another couple of sets, one of which introduced Breton bombardes, which blended very well with the other instruments and added a distinctive flavour to proceedings. Close your eyes and you could have been in Festival Interceltique Lorient. The piping finished with some immaculate jigs that conclude with a lovely tribute to seagulls that the pipe-major is clearly fond of.

The first half concluded with the drum fanfare that the audience absolutely lapped up. The top class corps was in sparkling form and while Tom Cruise did not actually abseil from the roof, the Mission Impossible pulse was clear. And that brought the first half to an end that was well over an hour long.

The second half was more “ScottishPower and guests” as the band took their foot off the accelerator playing wise and left us in the hands of RURA, who described themselves as a contemporary folk band.

The band returned with the “Picnic Reels” that finished in full flight with a great rendition of “Picnic in the Sky.” The band and their guests then stepped through a wide variety of musical tunes and settings with time signatures that did indeed make you think. The musical arrangements were very clever and well executed. Guest artist Finlay MacDonald added to the mix and one track after another threw up something different. So I am guessing from that point of view the band achieved their objective. The second half highlight for me was “In Praise of Home” and “Shouting at Buses” – an emotive vocal intro set the scene for a piece that made you feel very proud to be Scottish and, if you were not Scottish, you wanted to be.

Towards the end everyone was on stage and the ensemble were in full flight belting out great music and the audience were fully engaged. 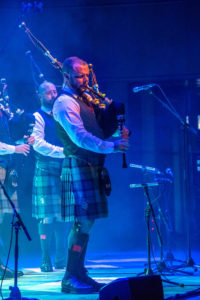 So what do you play for an encore? “The Braes o’ Killiecrankie,” of course. With vocal introduction, (“Whare have ye been sae Braw lad”) the band joined in to finish this great tribute to the Battle of Killiecrankie, fought in 1689 and which was part of the Jacobite rebellion. Audience on their feet and the job was done.

A second half was also over an hour so the audience certainly got value for their money.

I suspect people front and centre got the full benefit of the evening’s entertainment, but those on the wings perhaps did not. Difficult for any pipe band to manage, but I did hear several post-concert comments about the overpowering snare sound. But what can you do? For me 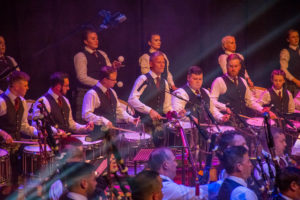 I was lucky and I enjoyed my evening’s entertainment. My hat goes off to all those involved and I whole heartily applaud the time and effort taken to produce the excellent music we heard.

So, no 6/8 marches, no MSRs (keeping the powder dry?) but, as promised in the program, innovative and new music. Times have moved on since the band’s last appearance in 2011, and they should be very proud of what they produced. 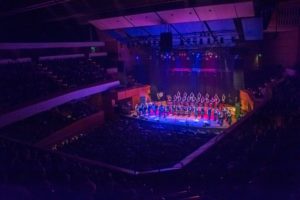 Will this band be in the mix at the weekend? Of course they will. Could they, for the first time ever, lift the title? Yes. Why not? I for one wish them the best of luck. Hopefully they, and all other bands taking to the field, will rise to the occasion and the challenges of Scotland’s tropical weather.

Euan Anderson’s experience as a piper encompasses the top levels of both pipe bands and solo piping. He was over several decades the pipe-sergeant of the Grade 1 Lothian & Borders Police Pipe Band and, before that, the pipe-sergeant of the Grade 2 Drambuie Kirkliston. Now retired as a detective with the Lothian & Borders Police, he serves as an accredited member of the Solo Piping Judges Association in Scotland and lives in Edinburgh.

Did you enjoy this interview and the fantastic photos, not to mention the more than 6,000 articles in our archive?

Putting together professional-standard content like this takes money, expertise, planning and time. Subscriptions and advertising make it possible. pipes|drums is nonprofit. The only thing we sell are subscriptionsm and we have no corporate or association sugardaddy.

If you’re already a subscriber, thank you! If you haven’t yet subscribed, it’s easy and costs less than 5 cents a day. We hope you subscribe! Thanks again.