The annual Pre-Worlds concert was held on Wednesday, August 9th, in the Glasgow Royal Concert Hall, and this year’s featured pipe band was Shotts & Dykehead Caledonia, 2015 Grade 1 World Champions. The concert, entitled RISE, was organized as usual by the Glasgow Skye Association Pipe Band who should be congratulated once again for continuing to host one of the premier events during the Piping Live! week. 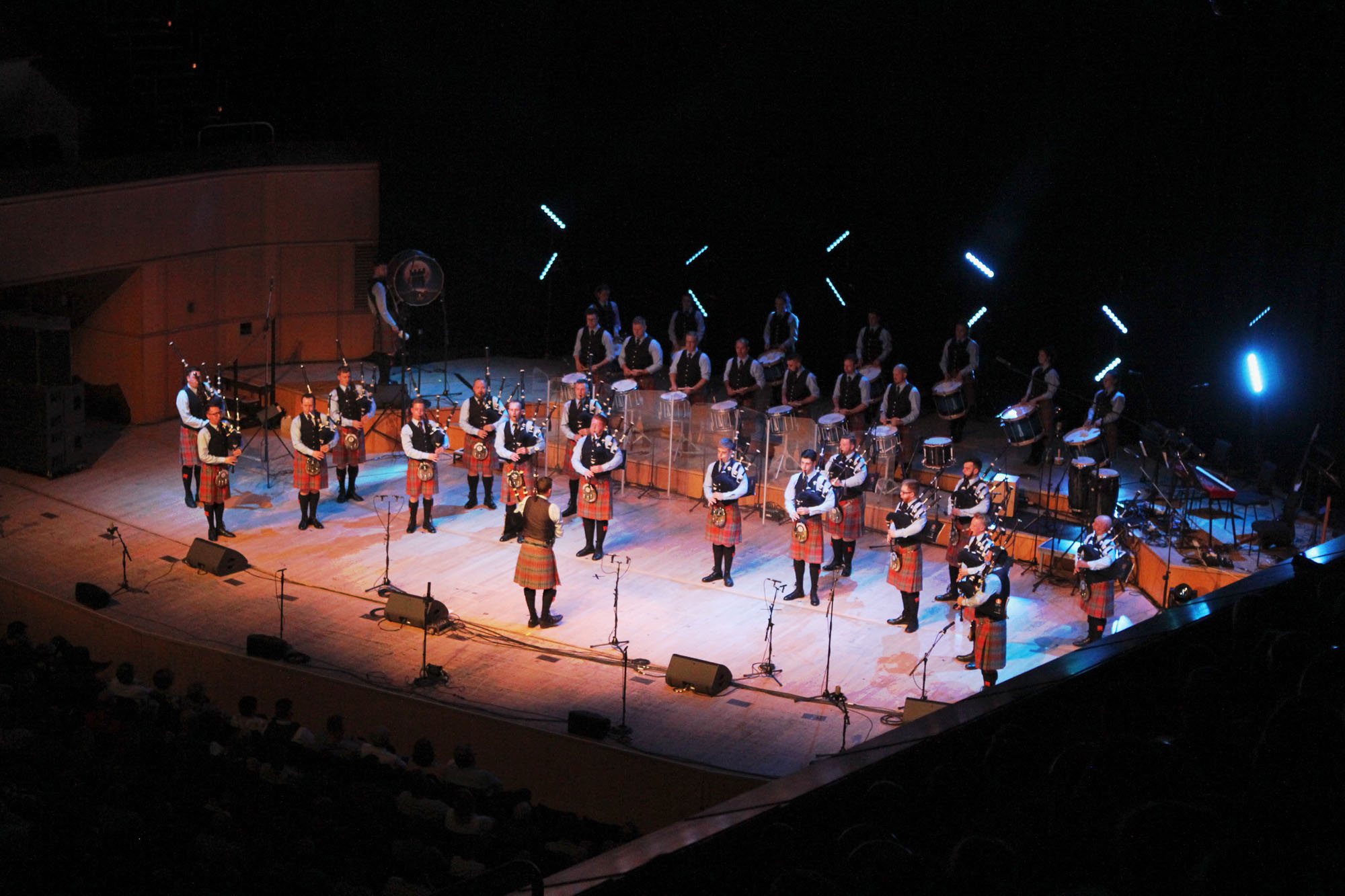 It has been a number of years since I last attended this concert, however, through social media I have managed to enjoy listening to a number of excerpts from recent concerts. I work with a couple of the members of the band and many of the concert-goers perhaps don’t fully appreciate the level of commitment, dedication and sheer hard work that is required to deliver a concert of this magnitude and quality.

The band were on stage for more than two hours with the usual intermission and consisted of 18 pipers, seven snare drummers, seven tenors and a bass. They were supported during several sets by a number of musicians and percussionists. The compere for the evening was Graham Brown, a former drummer with the band, who kept the show moving on with an assured style and humour.

From my position “way up in the gods,” the band presented an impressive sight and the lighting throughout the concert was discreet but effective. There were a number of small gaps in the program as the band made their way on and off stage but that is understandable given the number of personnel involved.

The drum corps was reduced to seven snares for the majority of the concert, presumably to give a better balance within this environment. During the fanfare this increased to 10 snares and I enjoyed how the snare and mid-section combined together to produce an exciting and dynamic performance. The seven tenors worked well throughout adding to the visual impact.

The band produced a wide and varied program with the usual competition sets. There were a number of soloists, tag teams and duets and I don’t think it appropriate to single out any one individual. The standard of technique, finger dexterity and virtuosity shown was at the highest level displaying the depth of young talent this band has. With nerves of steel, these pipers should be commended for their performances with not a dropped grace note in sight. Can a piper’s fingers go any faster?

The band finished the first half in impressive style with the set “The Siege.” With Andrew Bova on whistle, they played a very musical and haunting slow air, b

reaking into a march, followed by a number of jigs. With the band accompanied by their other musicians and percussionists, this was a very enjoyable set and left you excited for what was to follow.

The band was later joined on stage by the legendary Bill Livingstone for a set of tunes entitled ‘Old School”. The band had compiled a set of tunes all composed and played by top bands in the 80’s/90’s, before the vast majority of this band were born. It clearly evoked memories from the audience as cheers broke out from the audience as each tune was played. Bill again was in his element in front of the band conducting them through many of the tunes, a memorable combination.

In the second half the band paid a special tribute to Eilidh MacLeod, a young piper from Barra who tragically lost her life in the recent Manchester atrocity. With her parents in the audience, the band, accompanied by a singer and backing musicians, gave an emotional performance of “The Fair Maid of Barra.”

The band also played a set of six jigs which is no mean feat. This set was very effective as they used percussionists on tom-toms, harmonies to create contrast and excitement. The two pipe-sergeants and a snare drummer also featured in the middle of the set playing one of the jigs.

Their last set featured “Hector the Hero,” an interesting choice given its recent association with another top band, however, they made the tune their own. The band, accompanied by the other musicians, produced a very musical interpretation of the tune breaking into a couple of hornpipes for a rousing finish leaving the audience wanting more.

I was slightly disappointed with the encore where the band played a small reel. I thought they might have had something left up their sleeve to finish the concert.

I thoroughly enjoyed this concert and Pipe-Major Ryan Canning and his young band deserve credit for putting on such a good show. Does it give any indication of how the band is shaping up for the World’s, I don’t know and don’t really care. This was about entertaining their audience with an exciting and varied program of music to satisfy all tastes.

All the hours of practice, commitment and dedication paid off and the band can now relax and look forward to the weekend.

Wilson Brown is a Highland Society of London Gold Medallist and last year returned to solo competition. He was a piper in the Strathclyde Police Pipe Band for many years, winning more than 10 World Championships with them under P-M Iain MacLellan. More recently, he played with the Grade 1 Spirit of Scotland. Now retired from the police, he is an instructor at the National Piping Centre in Glasgow.