Second exclusive excerpt from ‘I Piped, That She Might Dance, the Lost Journal of Angus MacKay, Piper to Queen Victoria’ 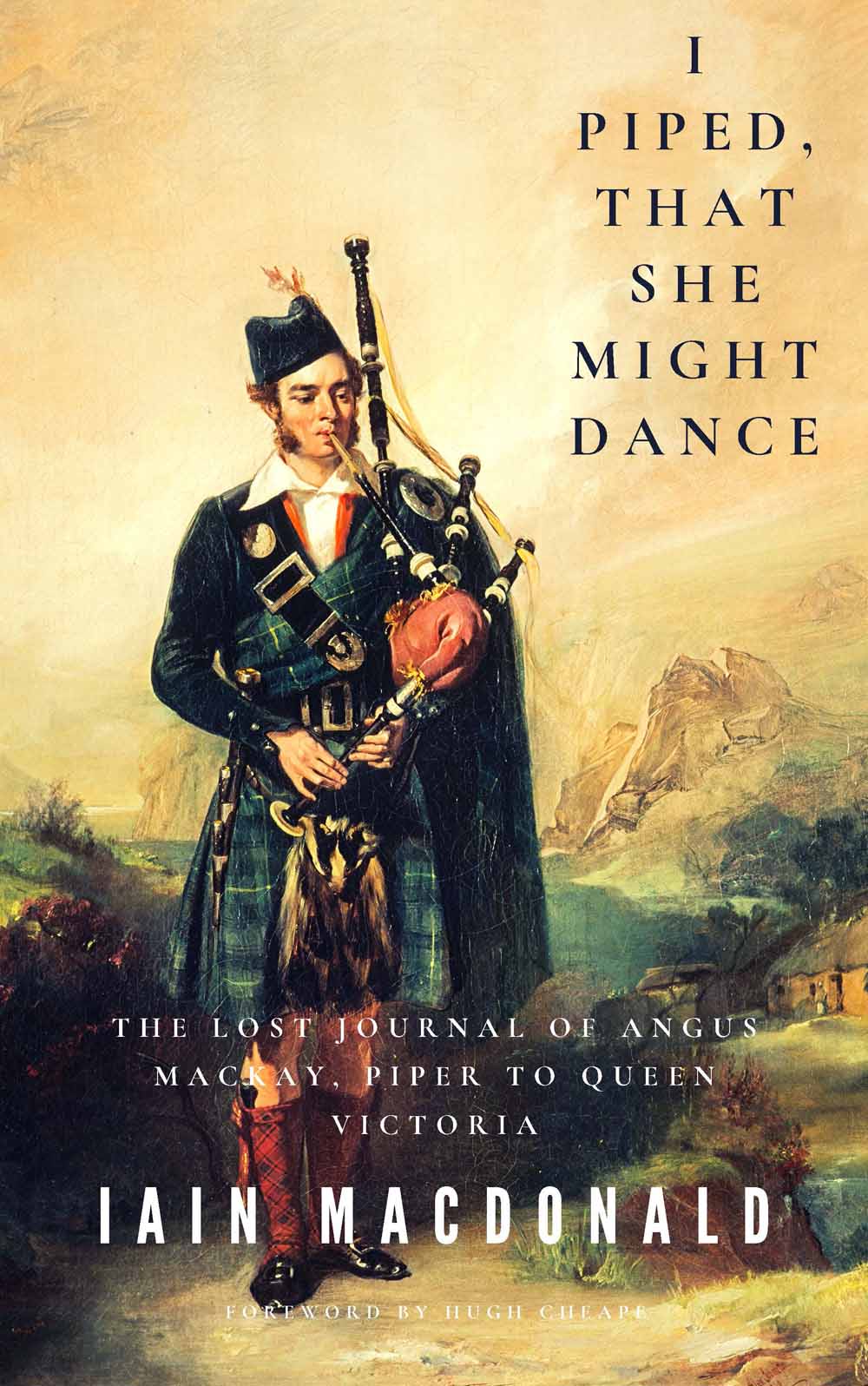 We recently announced the news of the publication of I Piped, That She Might Dance, the Lost Journal of Angus MacKay, Piper to Queen Victoria, a creative new historical novel by Iain MacDonald of Regina, Saskatchewan, about the life of Angus MacKay, considered by many, if not most, to be the most important Highland piper in history.

MacDonald’s book is one of the most creative efforts in piping history. He painstakingly researched and discovered historical material about MacKay, who is credited with publishing the most important collection of bagpipe music in history, ushering the repertoire into a standardized form. The collection was used as the foundation for the Piobaireachd Society’s Collection.

Angus MacKay served as piper to Queen Victoria until succumbing to mental illness, condemned to an asylum and, as he escaped, was considered drowned in the River Nith near Dumfries. His body was never found.

Due to the global coronavirus crisis, Ringwood Publishing, a small, independent publisher based in Glasgow dedicated to publishing quality works of Scottish fiction and non-fiction, has suspended distribution, but the company continues to take pre-orders for the book, priced at £9.99 plus shipping.

We’re pleased to bring pipes|drums readers an exclusive excerpt from the I Piped, That She Might Dance.

We continue from yesterday’s excerpt . . .

I piped at a large Burns dinner in London that January. His complete works had been published by Adam Scott of London, and excerpts were prepared and delivered at the dinner, with some piping to round off the evening. The recitation of “Tam o’ Shanter” was interrupted with laughter when the gentleman reciting pointed directly at me as he cried:

To gie them music was his charge;

He screwed the pipes and gart them skirl,

Till roof and rafters a’ did dirl.

This drew a great laugh and some nervous looks, as though they were expecting a response from me. I just laughed with the rest and waited with a smile for the focus to shift and the moment to pass. I was affected by the jibe, but I was also aware how keenly all were watching, and I wasn’t prepared to give them anything more to discuss.

It was clear that there were schemes in place to remove me from Her Majesty’s service. I knew that agents inside and outside the government would try to keep my submarine plans away from those who could protect the Queen and her family. They must have known that I was aware of plots to destroy the Queen, and I had told a few people about the plans I had made for destroying the Russian fleet. I was wary at all times and was constantly on watch for signs of being followed. Many times, while walking I would turn suddenly and see men disappear around a corner or cross the street so as not to be seen by me. I had the feeling of being constantly followed while in service, and I could easily read the knowing looks and glances of others when I was present. I decided that I must present my plans for submarines to Her Majesty before I was intercepted by forces against the Crown. I decided to ask for a meeting with Sir James Clark, who was the Queen’s physician. Understanding the gravity of this situation if I was to be intercepted, I also wanted to forewarn Mary of my intentions.

“Oh, Angus, don’t be mad!” was Mary’s response. “You can’t bring these wild thoughts before anyone, or you’ll lose the trust of Her Majesty and her officials. People don’t want submarines and plots from Angus MacKay, they want tunes.”

I then became angry and before I knew what was happening, I was being restrained by a clutch of men who were with him. It seemed to be exactly what I feared, and once again I found myself bound tightly to furniture and at the mercy of men who were happy to kick or strike me when I resisted.

But I knew I must act for the good of the nation. The more people said I was deluded, the more I understood that time was short. In early February I sent a message to Sir James Clark saying I wanted to meet to discuss matters of urgent importance to Her Majesty. Before too long, I was summoned to see Mr. Gustavus Blanch, one of the Queen’s physicians. He asked me many questions about my own health, which I found infuriating, and I insisted on showing him one of the submarine models I had made so he could understand my points. This seemed to have no real effect on him. I then became angry and before I knew what was happening, I was being restrained by a clutch of men who were with him. It seemed to be exactly what I feared, and once again I found myself bound tightly to furniture and at the mercy of men who were happy to kick or strike me when I resisted. I was held against my will for many hours while people came and went, all the while Blanch asking me further questions. He told me they were preparing to take me back to Bethlem Hospital. I was certain this would not happen, because they had already tried and failed. I decided to wait to see what would happen. Then I heard Mary’s voice, speaking to Mr. Blanch. I asked to see her, but she would not come.

In time, I was bundled into a carriage with Mr. Blanch and attendants, and we made the journey to South London quickly and with no conversation. At the hospital, I was brought to a waiting area and again questioned about my health and situation. Answers were written in a large book. It was then I learned that several people, including Mary, had spoken against my sanity, and that they did have the necessary grounds to put me in the hospital. Much was made of my use of alcohol, and of various matters pertaining to my collections of music. I heard them speak of my disappointment in the Collection of Ancient Pìobaireachd and of further disappointments with the non-publication of the manuscripts. These things held some truth, but their suggestion that my brother John was similarly affected was not true. John was not the same kind of man as me, and perhaps not the same as most, but he was great nonetheless. I was offended by the tone of the comments about him.

I was told that I would be kept at the hospital because of my supposed wild talk about the submarines and the Russian fleet, and that they doubted my ability to know what was going to take place in the future. It is hard to describe to people the reality of what we dream, and hard for others to understand that it’s possible to see the future. The modern world makes no allowance for the possibility of learning and understanding through dreams.

I was greatly saddened by the testimony of Mary. Hearing the troubles of our lives so starkly described removed from me any inclination to fight against this incarceration. Mary described the dreams I had and gave details of their obscene nature. She described my violent outbursts in the house and the destruction I caused while in a rage. I only half remembered some of these things. To tell the truth, I wasn’t so much sure what had been a dream and what had been real. This left a great emptiness in me, akin to the sadness I felt when I lost my father and brothers.

Iain MacDonald is one of the piping world’s great contributors. He is the pipe-major of Grade 2 City of Regina, a band that he has led for more than 20 years. He was a member of Grade 1 Babcock-Renfrew under the legendary Pipe-Major Iain McLeod, played with Grade 1 Simon Fraser University for several years, and currently plays with Grade 1 78th Highlanders (Halifax Citadel). He has been a teacher of piping all his life, and started the Conservatory Pipe Band for young pipers and drummers, which has produced dozens of new pipers and drummers. A composer and arranger, he published a collection of music, Along The Road, and runs a piping supplies business, Reelpipes.com, (a pipes|drums advertiser).