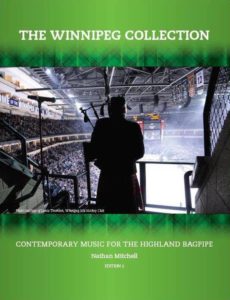 Print collections of pipe music are increasingly infrequent these days, and a second volume in a series is rare, but Nathan Mitchell has released The Winnipeg Collection, Edition 2, with 75 compositions from writers around the world.

As with the first edition released in 2015, proceeds from the new book are going to the Canadian Mental Health Association – Winnipeg. The publication was released in sync with the CMHA’s Mental Health Week, which used a #GETLOUD hashtag on social media to spread the word. “Get loud = bagpipes, so it fits perfectly,” Mitchell said.

In addition to Mitchell’s own tunes, well known composers such as Ryan Canning, Bruce Gandy, Lincoln Hilton, Ian Lyons, Simon McKerrell, Bob Worrall, and about 20 others have contributed to the collection, which is available online for $29.99 plus shipping.

Mitchell added that the book includes a biographical sketch of each composer and images or stories behind most of the tunes.

The Winnipeg Collection – Edition 1 has sold out of its first printing.

Since the advent of the Internet and easy and generally illegal file-sharing, the once flowing stream of printed books of music has been reduced to a trickle. Some composers, such as Chris Armstrong, have released collections in digital format, and several websites like Jim McGillivray’s pipetunes.ca and Jack Lee’s Bagpipe Music Library offer single compositions for paid download, with mechanical royalties paid out to rights-holders.