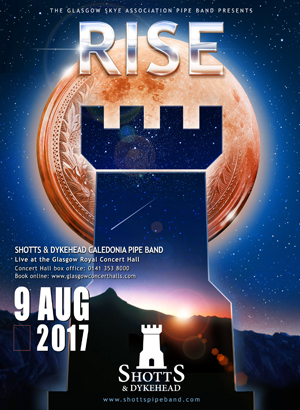 Tickets to Shotts & Dykehead Caledonia’s “Pre-World’s” concert at the Royal Glasgow Concert Hall are about two-thirds sold with about three weeks to go, according to the Glasgow Skye Association Pipe Band, organizers of the annual event.

Shotts’s “Rise” show will feature a special guest appearance by Bill Livingstone, who will lead the group through a medley of his own compositions.

+ Shotts Rises up for Pre-World’s Concert

“We are thrilled to have Bill join us at the Glasgow Royal Concert Hall,” Shotts Pipe-Major Ryan Canning said in a statement. “Bill is a living legend of piping and pipe bands and the whole band is really excited to have him join us on stage. I first spoke to Bill months ago about this and am delighted to now be able to confirm the news.”

Livingstone’s appearance coincides with the official launch of his book, Preposterous, Tales to Follow, at Piping Live! The 268-page memoir recounts the 75-year-old’s life of piping, pipe bands and personal exploits. He is well known as a composer of pipe music, with two collections to his name. His more popular tunes include the hornpipe “Lilian Livingstone,” the strathspey “Rodney Hull” and the hornpipe “The Captain’s Pledge.”

The concert is on Wednesday, August 9th, with tickets priced at £20 from the Royal Glasgow Concert Hall box office.

Glasgow Skye has been putting on the Pre-World’s Concert annually since 1994 when, coincidentally, Livingstone’s 78th Fraser Highlanders Pipe Band mounted their “Live In Scotland” concert at Motherwell, which was recorded and made into a CD.