It’s Boxing Day, and almost the New Year, so, because there’s no time like the present, The Style Guy has the presence to present you with a present for your Highland wardrobe presentation. New look, new you, now look at that new ewe.

It’s been awhile, but habits and styles change slowly, so it’s all good.

Let’s crack open the sporran to check on your queries of sartorial sense . . .

I am a member of a recently reformed pipe band with young and not so young members, ranging in age from 13/14 up to 70!

Over the last few years we have improved on the music front, but there is an overriding lack of pride and respect for the uniform that we are wearing.

I’m wondering is there any article written about “Pride and the Uniform” that I can distribute to the band members to install some pride in what we are doing as a group?

Any help would be much appreciated

Thanks for writing in, Regards. “Pride and the Uniform”? Is that anything like Pride and Prejudice? Maybe so, since there’s a lot of prejudging in piping and drumming, and that starts with what you wear. Slovenly band? They must be slovenly players. Sharp-dressed band? Must pay attention to detail. 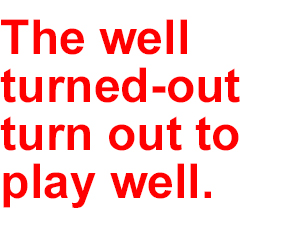 You see, the well turned-out turn out to play well.

And you can quote me on that. (Seems they already have on this page.)

In fact, I am working on my book. This will include not simply what to wear, but why whatever you wear should be worn well. You don’t need to be foppish about it and, in fact, it’s a rare piper and even rarer drummer who can pull off the look of a dandy. Even if you keep it simple, you can keep it detailed. It’s the difference between playing “Murdo’s Wedding” with or without the half F doublings. A dishevelled piper is far more likely to leave them out, even though it’s a simple, melodic tune.

If you are in a band that doesn’t mind appearing and playing messy, and you take pride in your decorum and performance, perhaps it’s time to find or start a new band, beginning with like-minded musicians.

It’s as simple as that. 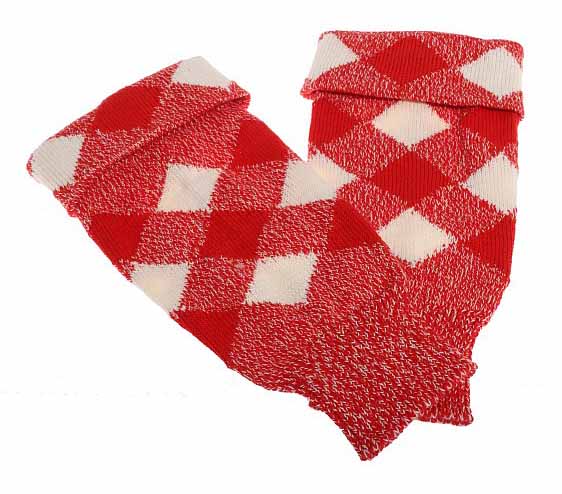 This is an excellent question. My answer is: it depends. It depends on how, when and what with these socks will be worn. “Diced” hose are not the same as tartan hose. The diced variety are usually red and white or red and black, and harken back to Victorian military days. They are often just “hose tops,” since they are seen above white spats, also things of yester-yore, and diced hose-tops are designed to keep pipe band costs down. So, if you’re meaning diced hose tops, the answer is that these are only appropriate if you are playing in a military or quasi-military pipe band that has to don a certain get-up to be historically accurate.

Now, if you mean tartan hose, the answer is, in general, a hearty yes. I love well-made matching tartan socks, even is a more casual daywear way. When once tartan hose were reserved for formal, black-tie, Prince Charlie jacket and waistcoat type events – worn only with patent leather buckled officer’s shoes – tartan hose today look sharp in many contexts.

A band kitted out with tartan hose, plain black jackets, crisp white long-sleeved shirts would look sharper than just about anything this side of the 1st Battalion Scots Guards circa 1955.

So, I say, go for the tartan hose!

Does the current fashion trend of mixing up patterns apply to pipers and drummers? I mean, tartan is pretty busy, so is it okay to wear something like a striped shirt, a checked jacket and a paisley tie?

Hey, PPP3, you must be some sort of textile savant or something. Here’s the good news: yes, it is indeed okay to riff off of the latest spread in GQ that shows all kinds of patterns and fabrics working against – but also with – each other. 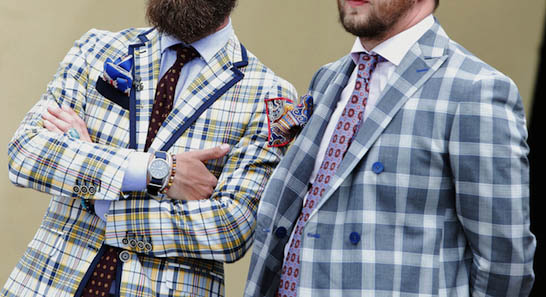 Unless you’re a rare band whose “tartan” is “green” or “saffron,” we are all starting from a complicated plaid palette. You might have noticed that bands took their cue from solo pipers many years ago and eschewed the white socks and white shirts. Colour crept back in, as bands got more adventurous (except for the ridiculous black waistcoat . . . more on that later), but they’re still pretty conservative.

A few fashion-forward solo pipers have been pushing the boundaries, with colourful socks and patterned ties, clashed up with striped shirts and maybe a pop of colour with the headgear. Very creative. One look at these folks and you know you’re not going to get another Willie Ross setting of “Blair Drummond.”

Bands would do well once again to take the cue from the solo world. Get in there with colours that compliment in a less-obvious way. Maybe polka-dotted ties, checked shirts and, hey, why not some retro white socks?

Every pipe band on earth now looks the same, and I think it’s because of those darned black waistcoats. 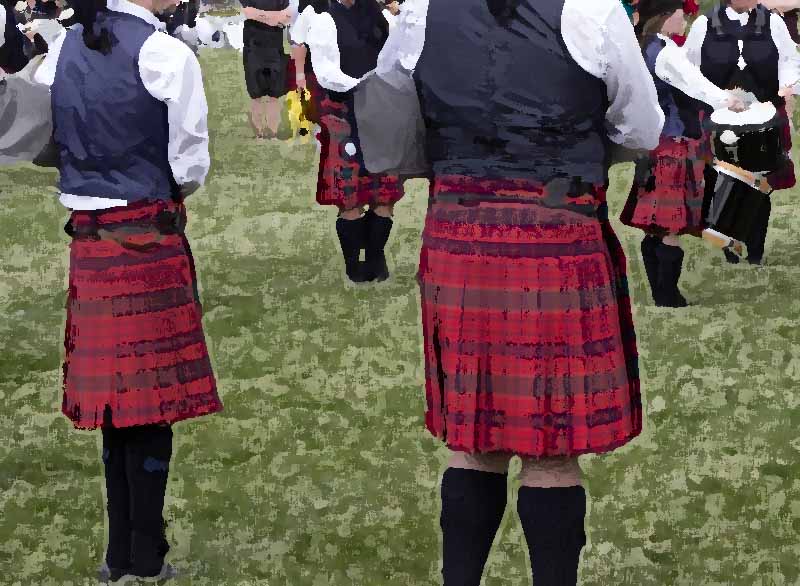 Thanks, Wasted. To answer your question: yes, I agree.

In the 1980s, the waistcoat emerged as a dandy solution to looking different. It was actually the Grade 1 Polkemmet Colliery Pipe Band that first came up with the look. It tuned heads faster than a Strathclyde Police introductory E.

Quite quickly, other bands glommed on. They started to acquire them to go with their ubiquitous black barathea jackets. This was in an age when pipe bands in the UK were expected to wear their jackets in competition. That’s not a problem when a jacket is well tailored, but because most bands can’t afford to dress every member in made-to-measure anything, jackets are generally unconducive to comfort with a pipe bag under your arm or wrists working the sticks or mallets.

So, a few of these bands discovered that they could ditch the jackets and hit the contest field wearing waistcoats, and not be accused of breaking the unwritten rule of wearing a jacket.

Soon bands all over the place got onto the vest/waistcoat wagon, replete with unsightly short-sleeved shirts, to the point where many bands don’t even have jackets. And now, almost every band looks the same, and most bands don’t make much of an effort to ensure that these things actually fit – that unsightly spill of shirt through the ill-fitting gap between the bottom of the vest and the rise of the kilt. Horrible!

We need a change. Now is the time to lay waste to waistcoats. I, The Style Guy, am hereby making a call to the pipe bands of the world to make an effort. Shake it up. Take off your waistcoats and set yourself free from the tyranny of sameness!

Got a question about what to wear or how to wear it? The Style Guy is here to help. Just send us an email with your query and TSG will give you some well-gotten advice!