Toronto – December 2, 2017 – The second round of the PPBSO Toronto Branch Solo Piping Knockout was held at Moss Park Armoury in the city’s downtown. Competitors play in a series of three competitions, held from October to February, with different tune requirements for each round. The top six competitors in each round accrue points to determine the cumulative top-six competitors in each division to compete in a final on February 24th, with Dr. Angus MacDonald adjudicating. Amateur A Division comprises Grade 1 and Grade 2 solo light music contestants, and the B Division is made up of those in Grade 3 and Grade 4. 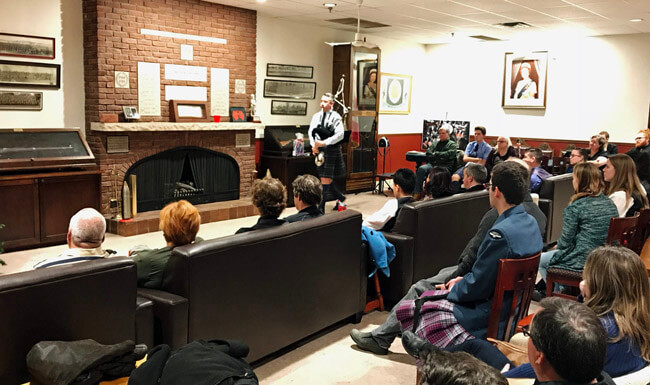 The afternoon competition was preceded by a well attended workshop conducted by Matt MacIsaac, who also concluded the day with a recital where he demonstrated his skills, including transposing a jig into a reel on-the-spot.

The winner of the A Division event, Mark McClennan, was presented with the Geoff Neigh Memorial Trophy, which the late Ontario piper arranged before his death from ALS. He specifically asked that it go to 6/8 march playing in amateur piping. Before the presentation, Jim McGillivray spoke about his late friend to the crowd of about 100 people.

Got competition results to share with the world and for piping and drumming posterity? Please do send them to us by email, along with a decent photo or two.