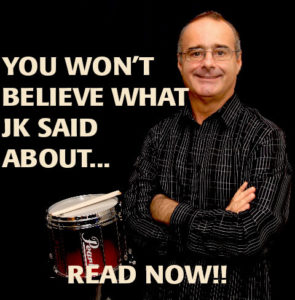 It was just a couple of weeks ago, Henrietta was tucking into the latest ad-heavy RSPBA Magazine to read the cover story on Jim Kilpatrick MBE, only to discover that, despite his photo being spread large on the cover, there was no actual story about His Jimness. He did get a wee mention in an article on drumming, but no cover story. She was some riled. Even the RSPBA can be into the click bait scene. YOU WON’T BELIEVE WHAT JIM KILPATRICK . . . <click> . . . <disappointment> I understand that KP himself was never even contacted about the article. Never knew about. Never saw it until someone asked him about it. “I tell ye,” Henrietta says, “they bring it own theirsel’s.”

Followers of the Scottish solo piping scene were a little surprised to see the late withdrawal from the Uist & Barra contest of two of the current top competitors in the World. Canny readers of this mag will perhaps have done the math on the last-minute announcement of the judging panel, followed by the withdrawals. These two players, each a winner of an event at this year’s Glenfiddich Championship, must have had very good reasons. And then afterwards things really make it clear that the right decisions were made and it’s right to take a stand. Vote with your feet. It’s amazing that more players don’t follow and vote with their feet. And where is the Competing Pipers Association when you need them? What about the judge’s associations and their codes of conduct? Sweep it under the rug! Keep sweeping! Unbecoming, indeed.