Well, here we go. A new pipes|drums website and everyone’s morning go-to looks a little different. Change is always hard, and and especially for solo piping and pipe band folk. We’ll just keep our families judging us, and our teachers judging us, and please don’t share any money you made performing our tunes. We’re like that — dead generous, giving. Well, except when we listen to other people playing. Look out! 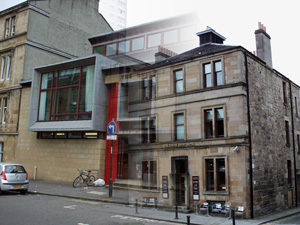 Tongue-in-cheekiness aside, how great is it that the National Piping Centre and the College of Piping have finally tied the knot? This was, after all, the original great idea that went sideways. No doubt there will be many decisions to be made, but this seems in the best interest of all concerned. It will preserve what has been accomplished at the College, and at the same time bring it all forward. Like at all weddings, there are bound to be a couple of bitter, rejected suitors mumbling at the side of the hall. Don’t buy them drink—that just won’t help. Want to cheer them up? Send them here.

Those of you who read Trailing Drones knew that already anyway. You are truly in the knew. You know? 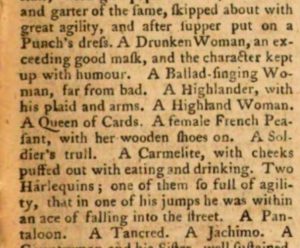 No doubt you’ve read occasional views on dressing in “Highland costume” for Halloween and other festive but non-Highland occasions. Well, there’s a trend that hasn’t changed since at least 1772, as reported by English historian Emily Brand. She re-posted the costume descriptions from a party at Carlisle House in 1772, which included, “A Highlander, with his plaid and arms. A Highland woman.”

The North American Grade 1 band scene seems at its lowest ebb in some years, with few bands likely to make the trip to Glasgow for the World Championships. SFU, Dowco Triumph Street, and the 78th Frasers are so far good to go. Ottawa Police have taken another season off, and Toronto Police are skipping the World’s. The 78th Highlanders (Halifax Citadel) lost their lead-drummer recently, and both Peel Police and LA Scots have been downgraded or self-downgraded or something, so the scene has shifted. Or has it? What if all the North American players played in North American bands, and the UK players in UK bands, and so on? (The Arctic Circle players in Arctic Circle bands, of course.) Dunno. The bottom line seems to be that North America is finding it increasingly difficult to compete with the strength of numbers and talent being produced across the board in the Scottish schools.

But, then again, maybe all this re-evaluation and regrading bring us to the realization that Grade 2 is every bit as competitive, satisfying and fun as Grade 1. Maybe it’s time for the world (and the UK) to recalibrate standards across all grades, and that means sweeping downgrades. If the RSPBA is not keen on creating a Premier Grade or Grade 1+ or whatever to separate out the truly elite eight or 10 Grade 1 bands, then maybe it’s time to add a Grade 2A and Grade 2B, and send down about 20 of the world’s current Grade 1 bands to Grade 2A, and even some to Grade 2B. Yes, it would take a bit of pride-swallowing, and some associations are loathe to downgrade any band or soloist unless they request it. They would rather keep people happy than do what’s right. But the paying public (as they are) simply don’t differentiate between Grade 1 and Grade 2, or, for that matter, Grades 3 or 4. The punters just want to know which the “best” bands are at the event they’re listening to. Interesting thought here: it’s widely seen that Grade 2 is the “flyover” grade around the world, with players going from Grade 3 bands right into Grade 1. Here’s a chance to recalibrate and correct the massive disparities between elite Grade 1 bands and those that now really belong in Grade 2A or 2B. 2B or not 2B? That is the question.

And what’s this we hear about a pipe band association spending $1,000 to find whether its logo complies with rules about using the national flag? Big flap over nothing . . . except maybe imprudent use of members’ money.

Here’s a funny bit. Can you imagine winning the World Pipe Band Championships, and not updating your website with the news? Or how about winning a Scots Trad Award for “Pipe Band of Year” and not mentioning it? Now, in fairness, that’s all on the Facebook page, but still, it’s amusing that Inveraray & District is so relaxed with the updates. Hitting a high note in websites at the moment is SFU, who have distilled their multiple, organization-wide websites into one big, slick package that will keep you reading for a month.

Last updates on the websites of the 2017 top six:

No question: change is difficult. Whether changing music, lead-drummers, bands, websites or buying new dungarees. Here’s hoping the weather changes to glorious spring wherever you are in the northern hemisphere, and for those of you enjoying your mid-summer beer tents, may the best performances win, no matter how good your dad, uncle or brother thinks you are.

Got scoop? Just send us a quick message and we’ll check it out. Anonymity guaranteed.