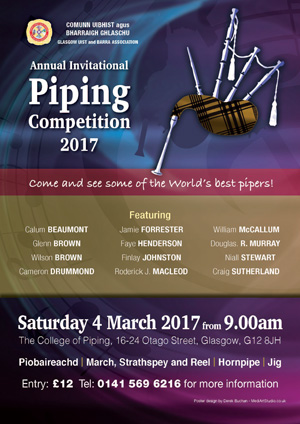 The annual invitational competitions put on by the Glasgow Uist & Barra Association is one of the great traditions in solo piping, and this year’s event on March 4th at the College of Piping in Glasgow will showcase the usual bevvy of a dozen elite players:

Of note, Callum Beaumont returns to defend his 2016 title, and highland Society of London Gold Medallist Wilson Brown gains an invitation after a successful return to solo competition in 2016 following a hiatus of nearly 20 years.

+ Beaumont out of the gate strong with win at U&B

Organizer John-Angus Smith said that tunes selected for competitors will be released early next week. The contest takes a traditional format, with Piobaireachd, MSR and Hornpipe & Jig events.

The contest was formerly a qualifier for the Glenfiddich Championships, but lost its status several years ago.