Wallacestone Pipe Band needs a tune – 500 quid up for grabs

The venerable Wallacestone Pipe Band of Falkirk, Scotland, is a survivor.

Founded in 1887, the band has stayed constant through two world wars, a worldwide depression, a global pandemic or two, numerous regradings from Grade 4 to Grade 1 and back, and more than a thousand competitions.

But even after 135 years as a viable competitive group, the band has never had a tune named for it.

They want to change that, so have launched a competition with the aim of establishing a namesake composition that will see it into their no doubt endless future.

With a first prize of £500, with the winner of the composing contest will be announced at the band’s dinner-dance on November 19th of this year. Choosing the tune will be Wallacestone Pipe-Major Neil Henderson and well-known pipers Craig Muirhead and Craig Sutherland, who will not know the author of any submission.

It has to be a march of some type. The composers of three short-listed tunes will be invited to the dinner-dance. Only one submission per composer, who must by 18 or older as of August 13, 2022, the deadline for entries, which need to be submitted digitally as a pdf file labelled “Wallacestone & District Pipe Band composition contest” with nothing to identify the identity of the entrant or the composer.

Important: “The score must be generated by computer in an easily-read format and handwritten scores or written notation on the score will not be accepted,” according to the rules set out by the band.

Composers need to allow the band to publish the winning and two other shortlisted tunes on their website.

Want to enter? Just send an email to band secretary Julia Kay with the pdf of the tune attached along with an introductory email with your contact information.

Wallacestone & District intends to include the winning tune in their permanent repertoire. The band currently competes in Grade 2 and has risen to Grade 1 status a few times in the past.

Wallacestone is a small village near Falkirk and the site of Scottish hero William Wallace’s final battle on July 22, 1298, battle during the war of independence against the English. A stone pillar marks where Wallace was believed to have stood to watch the approach of the English army. The story of William Wallace was glamourized in the Hollywood blockbuster, Braveheart, which featured the Highland and uilleann piping of Eric Rigler. 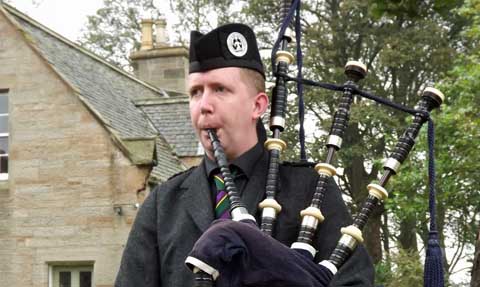