Born on June 25, 1927, at Cambus o’ May near Ballater, Scotland, due to compulsory wartime regulations, he had to leave Ballater school at 13 during the height of the Battle of Britain and started work at the local sawmill. About a year later he became a delivery boy, and for four years delivered coal and groceries to homes and farms up and down Deeside. The driver, excused from military service due to his age, often had young Wattie take the wheel when he had a little too much “refreshment” from grateful customers.

Along with many wartime boys, Wattie joined the local squadron of the Air Training Corps taking part in military skills training such as aircraft recognition and shooting competitions with the local Home Guard. Most weekends were spent at RAF Dyce near Aberdeen where cadets were issued their own parachute and could approach any unsuspecting pilot, snap a salute, and ask to be taken up for an air experience flight. Wattie flew in several aircraft now preserved in museums but on one occasion, he made a wrong career choice. During weekend training he gave a pilot his smartest salute to date, was greeted by a “jump in” and promptly ended up at Dalcross airbase near Inverness. Unfortunately, Wattie had inadvertently picked on a ferry pilot who was on his way to collect an aircraft from the USA. Apparently, Wattie’s mother was not exactly amused when the 16-year-old returned a few days later sitting behind the gun turret of a Bristol Beaufort. It should be remembered that this was in the middle of World War II and children were permitted to fly in operational aircraft!

It was during this time that Walter started his lifelong enjoyment listening to pipe bands. Ballater Green hosted numerous morale boosting pipe band displays and on one occasion he remembered a band with none other than the famous pipers “Bobs of Balmoral” and Jimmy McGregor in the front rank. Jimmy McGregor was the piper for Wattie’s sister’s wedding and Wattie had spent his short term at school with Robert Brown’s son.

Aged 17 Wattie volunteered to join the Marines but was turned down due to the closing stages of the war. He successfully sat his air gunners’ test at RAF Turnhouse but even with the war continuing in the East the demand for more aircrew had dried up. The Gordon Highlanders saw their chance and Wattie was conscripted a few months before the war ended. 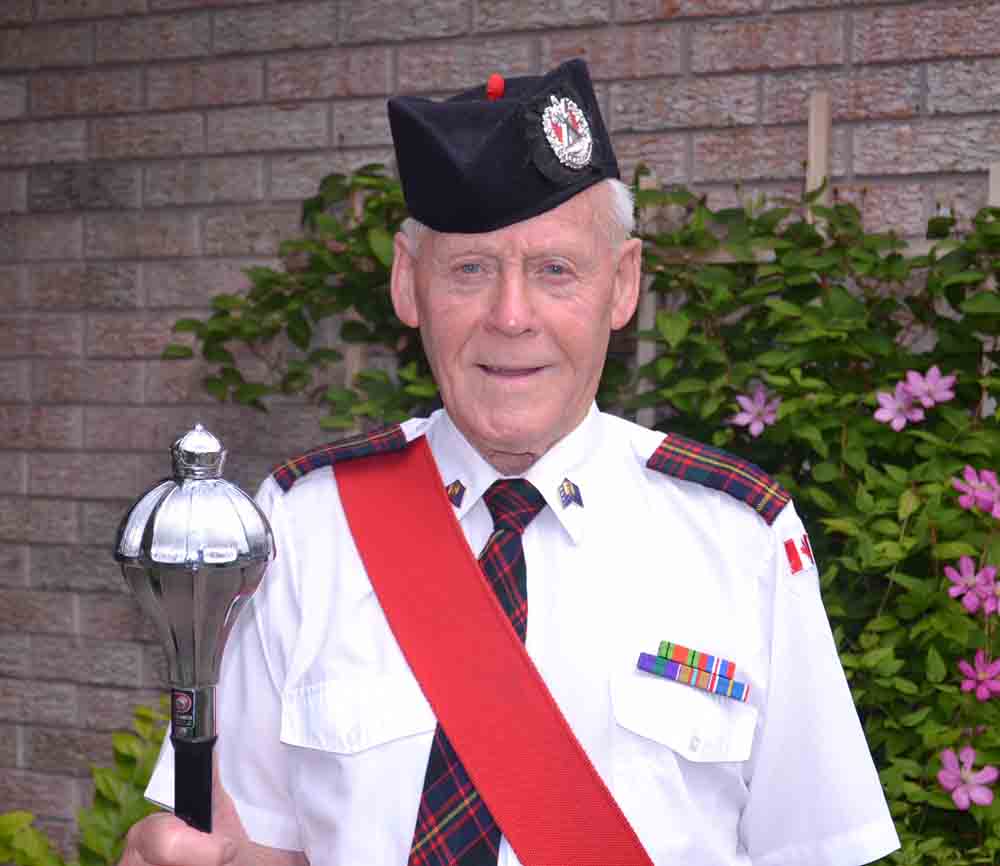 Basic training took place at Bridge of Don barracks in Aberdeen before embarking with the 6th Battalion Gordons, taking a scenic route via France for an operational tour of duty in Palestine. In 1946, Walter was again promoted to Corporal, this time as an adult and he moved to Nathania Camp near Tel Aviv in an anti-terrorist role against the Stern Gang seeking an independent state of Israel. This was followed by a short period at Heliopolis, Egypt, as a prison Staff-Sergeant. Behind bars, even as a warder was not to Wattle’s liking, and he asked to join the 2nd Battalion Gordon Highlanders.

Riot control and guarding the recently bombed King George Hotel in Tel Aviv was swapped for Royal Guard Duty at Balmoral and a welcome return to Ballater. As every soldier knows, if it’s not raining it’s not training and Walter spent many a dreich day at Cultybraggan Camp, Crieff, and then a short tour of duty at Aldershot where the Gordon’s were squeezed into Horsa gliders, before being dragged into the air tied to a Halifax bomber. Never a dull moment.

Wattie’s conscription was up but he decided to keep on serving Queen and country and joined the local Territorial unit of the 5th/7th Gordon’s until the early 1960s. As a weekend warrior, Walter was on exercise with a vintage self-propelled gun that started overheating. As Wattie tried to remove the radiator cap, an impatient officer whacked the cap with his walking stick and the escaping steam put Wattie in hospital for several weeks. The officer was court martialled and Wattie proudly claimed he was used in an experimental trial for serious burns recuperation.

On his return to civilian life, Wattie had never forgotten his skills behind the wheel as a young boy and he became a lorry driver, a profession he continued with until the family emigrated to South Africa in 1976.

Wattie was a keen motorcyclist and during his runs through Aboyne, he liked to scare a shy young woman walking her dog named Snooks. Romance blossomed and Elsie became a regular passenger until one day they stopped at a junction and Elsie put her feet down to ease her legs. Walter opened the throttle wide, and it was several miles before he realised Elsie was missing. Despite this, the couple were married in Aboyne Kirk in 1953, first living in the Huntly Cottages, Aboyne, before moving to Aberdeen.

Now the children had grown up, an opportunity arose for Wattie and his remaining family to join his daughter and her family in South Africa and a new chapter began. Wattie tried his hand at several jobs but excelled as a quality control engineer with a local engineering firm. Who says you can’t teach an old dog new tricks.

Not long after their departure Wattie’s son decided, at a rather late stage, to take up the pipes and surprise the family at the next Hogmanay which would now be in Roodepoort on the outskirts of Johannesburg. A nervous young man smuggled his pipes into the party and on the appointed hour played “Scotland the Brave.” Wattie, his eyes bright and tearful, approached his son, looked at him with huge pride and said, “That was brilliant, but I always enjoyed listening to the side drums!”

Wattie’s son was serving with the RAF at the time but managed to spend several weeks a year in South Africa. To pass away the hours he hooked up with Benoni Commando Pipe Band, an organization very similar to the Territorial Army in the UK and Wattie was persuaded to take up the Bass Drum. Wattie proved adept at keeping the beat, having a steady rhythm but objected to being at the rear of the band and decided his rightful place was at the front and he never looked back. Literally, as on one occasion, Wattie executed an impeccably smart right wheel and the rest of the band turned left.

Apart from this minor mishap, Wattie was a natural with the mace and his military bearing and attention to detail shone through even more than his highly burnished toe caps. Wattie became a welcome and well-known face at South African Highland Gatherings and pipe band competitions, eventually joining Krugersdorp Pipe Band before the next family move to Canada.

Wattie did not waste any time when he arrived in Stouffville, checking out the local pipe band scene and joining the local Legion branch where he became a regular feature as a poppy seller and at branch ceremonial functions.

It was a standing joke in the family that if you Googled “Stouffville” there was invariably an article and photograph of Wattie in one of the local papers. He was particularly proud to have been chosen to represent veterans as a torchbearer through Stouffville as part of the Pan Am Games in 2015.

Wattie became a member of two local pipe bands; Richmond Hill and Uxbridge Legion, where he trained two promising drum-majors and proudly led the Ontario Massed Legion pipe bands at the 2003 opening of the Canadian Centre at Juno Beach and Calgary Stampede.

One of Wattie’s favourite engagements in recent years was teaching the boys of St Andrew’s College, Aurora in the art of the mace. Over several years, Wattie drove up to the beautiful grounds in all kinds of weather to, not just pass on his knowledge, but to enjoy the atmosphere and savour the sounds of this first-class establishment.

October 2019 was one of Wattie’s last appearances as a drum-major. Uxbridge Legion Pipes & Drums played at Parkview retirement home in Stouffville where Wattie resided, and he had the honour of taking the salute.

He was first and foremost a family man and his family were his pride and joy. There were many special family events but the moment he was unexpectedly handed a mace and asked to lead 16 pipers, including his son, daughter and two grandsons onto the dance floor at his grandson’s wedding was just one of many.

Wattie loved pipe bands, but he also had a charming way with people and left his mark with whomever he met. He served his country and adopted countries with equal pride but never lost his roots or North East of Scotland accent, a true Highland gentleman in the best tradition.

Wattie will be greatly missed by his family.