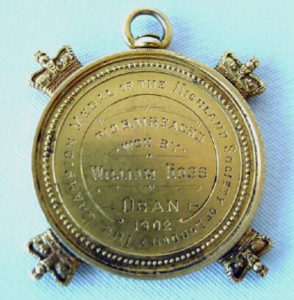 The Highland Society of London Gold Medal won by Willie Ross at the 1902 Argyllshire Gathering has been sold in an online auction for approximately US$1,300 plus a 25% buyer’s premium.

The medal was owned by an estate in New York and was reportedly a pull for the chain of a lamp, and was listed as solid 20 karat gold, weighing 34.5 grams. At today’s price of 20kt gold, the medal would be worth US$1,150, suggesting that the buyer will likely melt down the famous medal for the bullion. But Highland Society Medals from the same era are generally only 9kt gold, and, today, they are only gold plated. 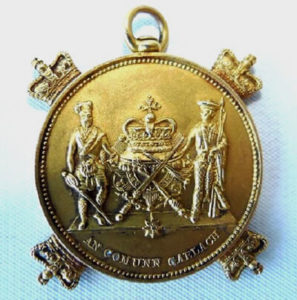 Pipe-Major William Ross was one of the greatest pipers in the history of the instrument. He is credited with standardizing much of the traditional light music repertoire of the Highland pipes with the publication of his five volume collection of music and his work on the first volume of the Scots Guards Collection.

In his prime as a competitor, which lasted for more than 30 years, Ross was often unbeatable. Among his prizes were eight Clasps at the Northern Meeting and 11 Formers Winners March, Strathspey & Reels at Oban and Inverness. He was Director of the Army School of Piping at Edinburgh Castle for many years, taking numerous great pipers through his legendary Pipe-Majors’ Course for training leaders in the various Scottish regiments.

Willie Ross was named to pipes|drums’ list of the 20 Greatest Pipers in History, as chosen by a panel of experts.

The historical value of the medal for the piping and drumming world is great, but it is now likely too late to save the priceless artifact.

The museum of the National Piping Centre in Glasgow has a collection of trophies and medals from piping history, curated by the well known piping scholar Hugh Cheape of the National Museums of Scotland. Other famous medals are also in the hands of some private collectors among the piping and drumming world, including several of the Clasps won by John MacDonald of Inverness.

Editor’s note: we subsequently learned that the medal in question was won by Corporal William Ross, not the Willie Ross. A follow up piece outlined the findings.