The rocky political road for the Australian pipe band scene got considerably bumpier after the resignation of the treasurer of both the Queensland Pipe Band Association (QPBA) and the Pipe Bands Australia (PBA) collective of Australian state pipe band associations.

The QPBA and PBA issued somewhat cryptic statements to members and the general public regarding the accounting situation, saying that the matter had been reported to the Queensland Police, and the Victoria Police, where Pipe Bands Australia is incorporated.

The treasurer had served with the QPBA / PBA for nine years before submitting her resignation following the appointment of a new Pipe Bands Australia Queensland Branch executive at a meeting in November 2016. At the meeting the branch’s audited financial statements were not available, and were not delivered until late January 2017

“The contents of those accounts, the Treasurer’s continuing absence from Qld Branch and QPBA meetings and a variety of other information caused the Qld Branch Executive, and myself on behalf of the QPBA, to agree that evening to seek her resignation and also to audit her conduct,” the statement from QPBA Secretary Alex McConnell read. “Pipe Bands Australia (Qld Branch) also advised the President of Pipe Bands Australia at that time.”

McConnell said that results of the investigations conducted by the police and the branch will be reported at the branch’s annual general meeting on February 21st. 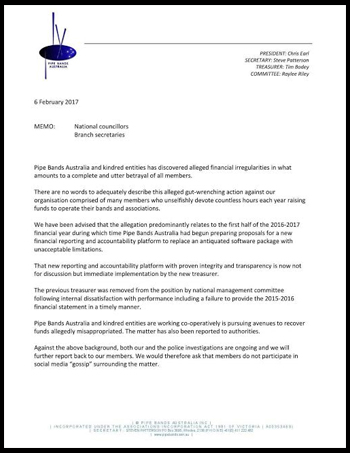 A memo from Pipe Bands Australia to PBA National Councillors and Branch Secretaries read: “There are no words to describe this alleged gut-wrenching action against our organization comprised of many members who unselfishly devote countless hours each year raising funds to operate their bands and associations.”

The amount of money in question is not known, but was described by a source who spoke on condition of anonymity as “substantial,” and went on to say, “there may well be resistance to one person holding treasurer roles at two levels in the future.”

The situation follows a protracted dilemma with the Grade 1 City of Whitehorse Pipe Band of Melbourne. Four members of the band were suspended for alleged comments on the band’s members-only Facebook page regarding Pipe Bands Australia and RSPBA judge Nat Russell. The band’s pipe-major and leading-drummer were suspended for four years and two years, respectively, and two other members were banned for a year.

+ City of Whitehorse breaks down

In the two statements about the matter, McConnell and Roach and the  requested that “members do not participate in social media ‘gossip’ surrounding the matter, and the PBA memo to National Councillors and Branch Secretaries also pleaded to members not to talk about the matter on social media. The QPBA statement included, “If you have any questions, please contact me,” and in the joint statement, “please contact either of us.”

At those invitations, pipes|drums contacted both McConnell and Roach with questions regarding the matter, but had not received a response at publication time.

Pipe band membership in Australia is completed on a national level, with funds redistributed by PBA to state affiliates, so transfer of moneys between organizations is routine. It is believed that any financial discrepancies, if indeed they occurred, likely would have happened quickly around the Christmas and New Year mid-summer break in Australia.